The fat lady is warming her vocal cords in the Premier League. Even Jurgen Klopp is getting tired of denying that it's all over now. However, while England's top-flight trophy has been Anfield-bound since about October, across Europe, several title races are still very much alive and kicking.

After years of one-club dominance, the championships in Italy, Germany and Spain are all very much in the balance, while there's more fun to be had across the continent.

Here we at 90min have put together a list of Europe's top five leagues (plus a couple of others thrown in for good measure) ranked by how exciting/competitive/generally just good they've been this season... Another season, another title destined for Paris. It appears that French giants PSG will enjoy a trouble-free run-in and canter to their third straight Ligue 1 title and seventh out of the last eight.

Neymar, Kylian Mbappe and co. (regardless of any off-field drama or transfer sagas) have a 12-point cushion over closest rivals Marseille and haven't lost since the beginning of November in a 2-1 defeat away to Dijon FCO. They've also - unsurprisingly considering their attacking complement - scored 21 goals more than any other team in the division, while their GD is +30 over the next highest. The ​Premier League has been done and dusted since Christmas. While mightily impressive, ​Liverpool's record 22-point ​lead over second-placed ​Manchester City hardly makes for edge of the seat viewing for the neutral.

Jürgen Klopp's men have blown all comers away this season, becoming the first team to beat all other 19 teams in a single Premier League campaign and making Man City's title defence look somewhat pitiful.

It's very much a case of when as opposed to if. Amazingly, the Reds can now lose seven of their remaining 13 games and still be named the best team in England for the first time in 30 years.

Most depressingly for their rivals, the only real excitement remains in seeing which historic records Liverpool will smash.

Liverpool are still unbeaten in the Premier League (and closing in on Arsenal's 'Invincibles' record), they could still win the treble (squeaky bum time for Man Utd) and have their sights on a record points total in the division (besting Pep Guardiola's Man City). 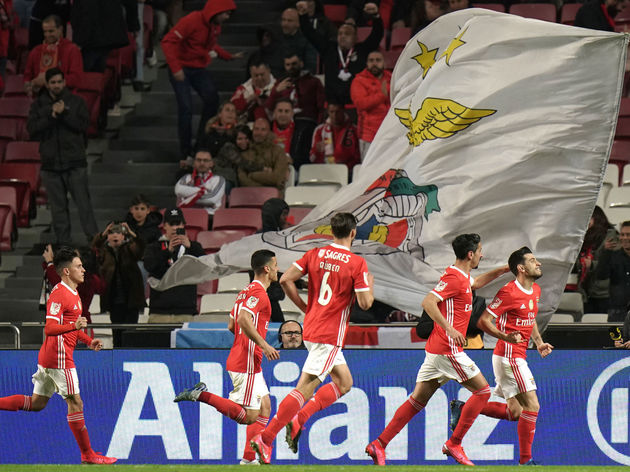 It's all gone to plan for Benfica in Portugal's top flight so far this season, after early shock contenders Famalicao fell away following a bright start.

Bruno Lage's side have lost just once in 19 outings (winning the other 18) and sit seven points clear of Porto at the top of the pile. Braga, in third, are 11 points off Benfica.

With only eight goals conceded and 47 scored in 2019/20, the Lisbon-based side are well on course for a seventh title in the last eight.

In the Golden Boot standings, the top two scorers (Pizzi and Carlos Vinicius) both play for Benfica... Who would have thought it, that those playing north of the border are providing a more intriguing and competitive title race than their English counterparts?

But it is true. Celtic's reign has come under serious threat this year thanks to Steven Gerrard's resurgent Rangers.

At one stage, the seven-point gap between the sides was far narrower but despite the Hoops pulling away in recent weeks, the Gers still have a game in hand.

With one last Old Firm derby still to play and Jermain Defoe and Alfredo Morelos firing, Gerrard's men are still in with a fighting chance of bringing the title back to Ibrox for the first time in nine long years. A potentially classic finale is brewing between old rivals ​Real Madrid and ​Barcelona at the top of La Liga this season.

A revitalised and pragmatic Los Blancos currently edge the battle for supremacy, having opened up a three-point gap over their fierce Catalan adversaries, who have won seven of the last ten titles in Spain.

An internal battle, injury woes and poor transfer planning threatens to derail Barça's season in spectacular fashion but the two old rivals still have to face each other in part two of El Clasico at the Bernabeu in under a month's time.

The encounter could prove to be the defining moment in the ​La Liga title race, so expect fireworks. Sarri's ​Juventus currently have the edge but the Old Lady are not having it all their own way this season and Conte's Inter are only three points adrift in second.

Unlike recent seasons, Juve have not been at their imperious best this campaign and ​Inter - who have strengthened with the eye-catching arrival of Christian Erkisen among others this January - may be set to land their first Serie A title in a decade.

Surprise package Lazio also have a chance of scooping the Scudetto. Simone Inzaghi's side beat Juve 3-1 in the Supercoppa final and sit two points behind Inter, with a game in hand.

It remains to be seen which of the three will claim Italian football's top prize but one thing is for sure, Juve's eight-year dominance of the league is in very real danger of coming to an end. The days where ​Bayern Munich dominated the German top flight, claiming the championship crown by March are seemingly long gone.

Yes, the Bavarians are still top of the league, but they have only regained their lofty position following RB Leipzig's slip-up in the last round of fixtures - and only a point splits the sides.

However, it's not a two-horse race by any stretch, oh no siree! Sitting just a win away from the summit are both ​Borussia Dortmund and Borussia Mönchengladbach.

Dortmund armed with the deadly Erling Haaland who has scored (a frankly insane) seven in his first three games for the club are mounting a serious challenge for the title.

And with just three points separating the top four teams in Germany, it really is any one's guess who will be lifting the ​Bundesliga aloft in May.