​Sheffield United moved into fifth place with a big win on Saturday afternoon, as they beat Crystal Palace 1-0 at Selhurst Park.

The hosts had the lion's share of possession in the first half, but their finishing was not up to standard. Christian Benteke failed to touch in Jordan Ayew's low cross, while Gary Cahill couldn't find the back of the net with his header.

After a quiet first half, it was Sheffield United who broke the deadlock before the hour mark. Oliver Norwood whipped his corner into the box, and goalkeeper Vicente Guaita caught it before dropping the ball over the line, gifting the Blades an unfortunate yet priceless advantage.

James Tomkins had a huge chance to level it up, but he couldn't made contact with his free header. Palace looked to be in deep trouble when Joel Ward was shown a straight red card for a late challenge, but VAR overturned Andy Madley's decision and instead gave Ward a yellow. 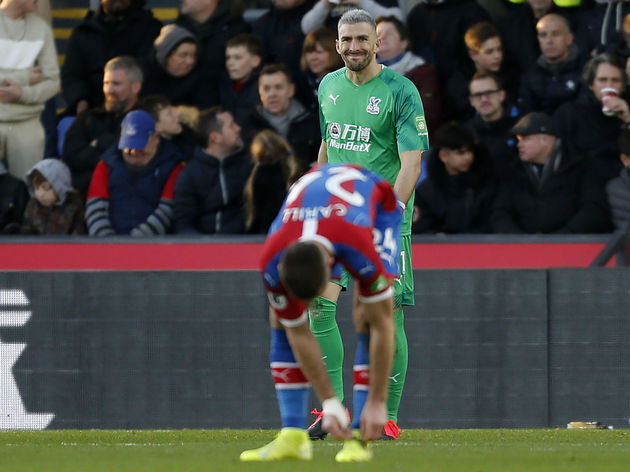 ​Crystal Palace were the better side in an uneventful first half, but for all their shots on goal they couldn't break the deadlock. The Eagles moved the ball well and had good spells of possession, but every time they arrived in the final third they didn't have that confidence to finish their chances.

They didn't regain their control of the game after the break, and a shocking error from Guaita saw them fall behind. Palace did improve and forced Dean Henderson into some good saves, but the damage had already been done and they didn't show enough character to be able to get back into the game.

Palace weren't shocking, but they were the architects of their own downfall with no cutting edge and unnecessary mistakes. Roy Hodgson will be disappointed his side didn't come away with anything, but it's another harsh lesson for Crystal Palace in a devastating defeat.

STAR MAN - Palace were below par all afternoon, but captain Luka Milivojevic put in a decent shift. His high work rate and controlling play in the middle of the pitch drove the Eagles forward, producing a good performance in an underwhelming team display. ​Sheffield United have been excellent away from home this season, but the opening 45 minutes suggested no signs of another win on the road. They didn't even muster an attempt on goal, only going into the break goalless as a result of the hosts' poor finishing and lack of cutting edge.

The Blades woke up in the second half, and were much improved after the break. A goal was surely coming and, while it didn't arrive in the expected fashion, it was exactly what Sheffield United needed to take control of the game and find their confidence at Selhurst Park.

It was a smash and grab result for Chris Wilder's side, but they had to battle hard after their goal to see out the win. It wasn't a vintage Blades performance but the result is nonetheless fantastic, as they move into the Europa League spots with a huge victory in the capital.

STAR MAN - The three points were won with a solid defensive performance, and at the heart of that was John Egan. The Irish defender was an absolute rock in the centre of defence, and in an excellent team display he didn't put a foot wrong in an outstanding display at the back.

John Egan was all of us after that  pic.twitter.com/gFePQHymm6

Just when Berge was looking to be my favourite player, John Egan makes that header and irons their player out to keep the title! ⚔️⚔️⚔️⚔️

That back 6 there were superb, to a man. John Egan is exceptional and for Baldock to keep his cool for the second 45 was a testament to how good he is. Another brilliant win. #sufc #twitterblades Crystal Palace travel to Merseyside next Saturday for an early kickoff, facing ​Everton at Goodison Park. The Eagles then have two weeks off for their winter break, before welcoming ​Newcastle to south London on 22 February.

Sheffield United host struggling ​Bournemouth next Sunday, as they look to return to winning ways at Bramall Lane. They are back at home after the winter break, facing another south coast side in the form of ​Brighton on 22 February.