Sinclair’s tally breaks the previous world record held by former USWNT star Abby Wambach, who retired with 184 international goals to her name in 2015.

Sinclair scored the record equalling 184th goal just six minutes into the game against St Kitts & Nevis in Edinburg, Texas, where all Canada’s 2020 Olympic qualifiers are being played.

The 36-year-old then went on to net the record breaking 185th goal, which was Canada’s fourth of the game, midway through the first half. In the men's game, Iranian legend Ali Daei is the only player to scored more than a century of international goals (109). Cristiano Ronaldo has 99.

Sinclair made her debut for Canada back in 2000 while she was still at high school in Burnaby, British Columbia. She scored her first goal in her second appearance, a game against Norway at the annual Algarve Cup, before netting a brace against Denmark in the same competition.

She has been a model of consistency and testament to longevity for two decades since.

Sinclair attended the University of Portland south of the border from 2001 until 2005. By the end of 2003, she had already scored 43 international goals for Canada. Her chance at a professional club career came with the launch of the Women’s Professional Soccer (WPS) league in 2009 when she was drafted eighth overall in the international draft by Gold Pride. When WPS was dissolved and the NWSL was launched in 2013, Sinclair joined Portland Thorns and has remained there ever since, winning the 2017 championship.

Sinclair’s most prolific year of international goalscoring came in 2012 when she netted 23 times in 22 appearances. That included six goals at the Olympic tournament, from which Canada claimed a bronze medal. Three of those goals came in the semi-final against the United States as Canada ran the eventual champions all the way in a thrilling 4-3 defeat at Old Trafford. 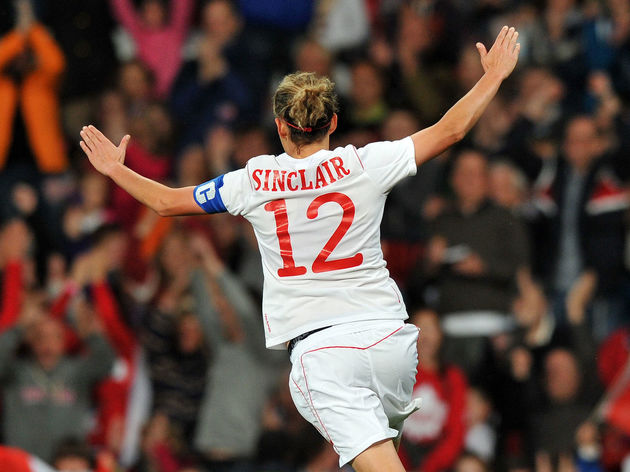