​Liverpool were dealt a major blow this week as it was confirmed that Sadio Mané had suffered a minor muscle tear, meaning the winger will miss his side's clashes with West Ham and Southampton.

As the club's joint top scorer in 2019/20 with 11 Premier League goals in 23 appearances, ​Mané, who was recently crowned the January addition Takumi Minamino is yet to make a ​Premier League start for Liverpool but was the man to replace an injured Sadio Mané at Wolves last week.

Signing from Austrian side Red Bull Salzburg for around £7.5m at the start of the month, after scoring five and assisting six in just 14 appearances in the Austrian Bundesliga before making his move, Minamino carries over some fine form and he could be the man to fill the gap.

Acting as an inside forward, cutting in from the left, it would make sense for the Japanese international to come into the team as Klopp wouldn't have to change his tactics a great deal, with ​Firmino operating through the centre as a false-nine and ​Salah on the right flank.

With two massively winnable games coming up against West Ham and Southampton, it would be beneficial for Liverpool's newest signing to make his mark and build some confidence. Just imagine the ovation he'd receive at Anfield if he scored against the Saints. 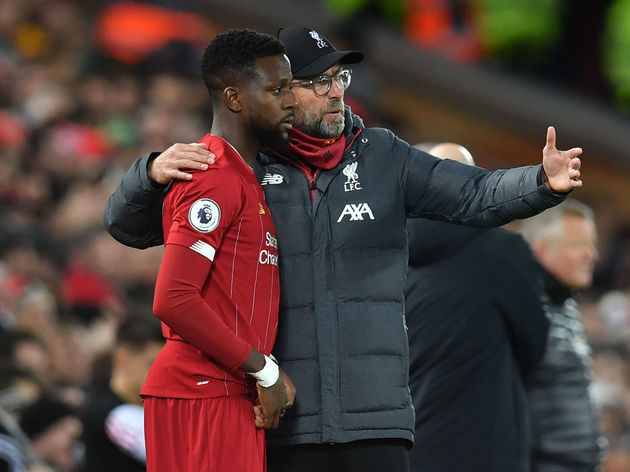 Known for his dramatic 96th winner against Merseyside rivals Everton last season, and of course scoring a brace in that 4-0 comeback win over ​Barcelona in the Champions League, Origi has cemented himself as a fan favourite at Anfield since his return to the club after various loan spells abroad.

With a goal or an assist every 127 minutes in all competitions this season, he is a prolific threat in attack and would be able to fulfil a role effectively in Mané's absence. Where he differs to Minamino is the way in which he makes use of himself in attacking situations. Instead of making fine movements like his agile teammate, Origi opts for sheer power as he often drives forward on the overlap.

Origi would of course also offer ​Liverpool more of an aerial threat than Minamino and if Klopp were to select the Belgian, Trent Alexander-Arnold would be licking his lips at the potential of lifting balls toward the far post where he'd likely be waiting to pounce at every opportunity. One thing which manager Jürgen Klopp certainly hasn't been afraid to do - particularly in recent weeks - is to utilise the wealth of youth prospects that Liverpool have on their books.

With recent cup encounters against the likes of Arsenal and Everton, the Reds have overturned their opponents with an array of kids on the field.