​Bayern Munich earned a well-deserved 5-0 victory over rivals Schalke on Saturday evening, as the German champions closed the gap to RB Leipzig to a single point at the top of the Bundesliga.

Die Roten took the lead after only six minutes, when Schalke goalkeeper side-footedoffside You just know ​Bayern are going to win the league, don't you? No matter how badly they start the season, no matter how difficult they make it for themselves, the Bavarian club will always climb to the top by the end of the season. Der FCB knew before kickoff that a win would take them to within one point of RB Leipzig, after the league leaders slipped to a shock defeat earlier in the day. And Bayern's three points were never in doubt. The hosts battered Schalke from the off, scoring in the opening five minutes and refusing to take their foot off the pedal as the game progressed. Germangiantsunderthey're

STAR MAN - ​Thomas Muller truly is one of a kind. The German's Bayern career looked to be over under Niko Kovac, who clearly didn't fancy him as part of Der FCB's future. But unsurprisingly, the forward outlasted his now-sacked boss. The advantage of utilising a player of Muller's abilities is that he can play just about any position and perform any role asked of him. 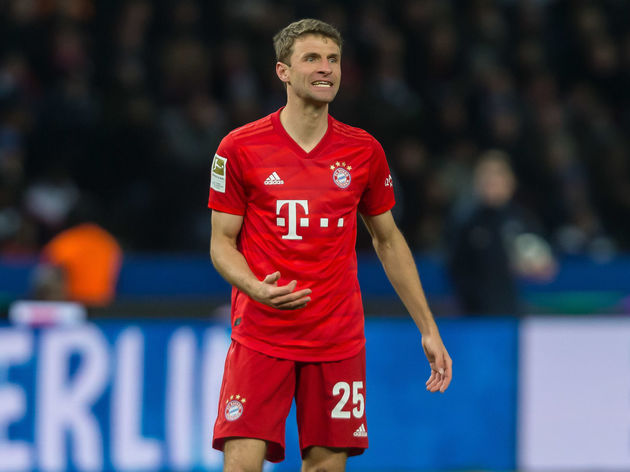 The 30-year-old was forced into a right-wing role against Schalke, and he hugged the touchline throughout the match, whipping crosses in from wide and arriving at the far post to win any headers that came his way. It was Muller's cross which led to the opening goal, and his strike at the end of the first half killed the game as a contest.

There has certainly been no love lost between Bayern and ​Schalke over the years, and the latter have lost a number of stars for nothing to their bitter rivals. The likes of Manuel Neuer and Leon Goretzka have made the move across to the Bavarian club, and STAR MAN - This one is a toughy. Schalke were absolutely awful from start to finish. The goalkeeper couldn't catch the ball, the defenders failed to put in any tackles and the midfield lost the ball in dangerous areas time after time. So, the 'Star Man' is simply the player who was less bad than the others, rather than someone who actually deserves it. Amine Harit, step forward! The trequartista caused Bayern a couple of problems in the opening 20 minutes, before the hosts truly took control and nullified any threat. After that, Harit didn't really do a great deal - but doing nothing is sometimes better than doing something - and that was exactly the case for the attacking midfielder.

Chuck this award in the bin when you get home, Amine.

Bayern follow up their huge victory over Schalke with a trip to relegation-threatened Mainz on Saturday afternoon.

Schalke travel to Hertha Berlin in their next Bundesliga, as coach Wagner looks to bounce back from their crushing defeat to Bayern.