Diego Simeone's struggling Atlético Madrid side host Leganés at the Wanda Metropolitano on Sunday, as Los Rojiblancos look to build momentum and close the gap between Real Madrid and Barcelona at the top of​ La Liga.

Atlético have withered away following the turn of the new year, and their woeful display's came to a head in their most recent defeat against third-tier Cultural Leonesa in Copa Del Rey round of 32. Simeone has seen his team win two of their last five games in all competitions, but has lost the last three on the trot against Real Madrid, Eibar and the aforementioned Cultural Leonesa.

That is nothing in comparison to Sunday's opponents, Leganés, who are rock bottom of La Liga with just three wins so far this season and four points from safety. Javier Aguirre has seen his side win three of their last five games, including two Copa Del Rey wins over Murcia and CD Ebro, but saw his side fall to an embarrassing 3-0 home defeat against arch rivals Getafe. Both sides will be aiming to collect all three points on Sunday morning in this Madrid derby and should be a fiery encounter with Atlético and Leganés both looking to turn their dire seasons around.

Simeone will have a few absentees ahead of ​Los Colchoneros' fixture against Leganés on Sunday.

​Diego Costa remains sidelined due to an ongoing herniated disc, Santiago Arias is out due to adductor problems, Koke and José Giménez continue to recover from a muscle injuries, while Kieran Tripper continues to recover from a groin strain.

Felipe is also at risk of suspension if he is cautioned after already amassing four yellow cards so far this campaign. Los Pepineros will also have a few injuries to contend with ahead of their visit to the Wanda Metropolitano.

Alexander Szymanowski is unavailable as he recovers from an ACL injury, while Dimitrios Siovas continues his rehabilitation on his ongoing knee injury.

Lega will also be without the services of midfielder Rubén Pérez as the Spaniard serves his one match ban following his card suspension, while centre-back Kenneth Omeruo is at risk of a similar suspension if he is booked on Sunday.

There have only been eight meetings between Los Indios and Leganés, with Atlético dominating proceedings. The home side have registered five wins while the remaining three games have ended in a draw with Lega yet to win a game against their Madrid rivals. 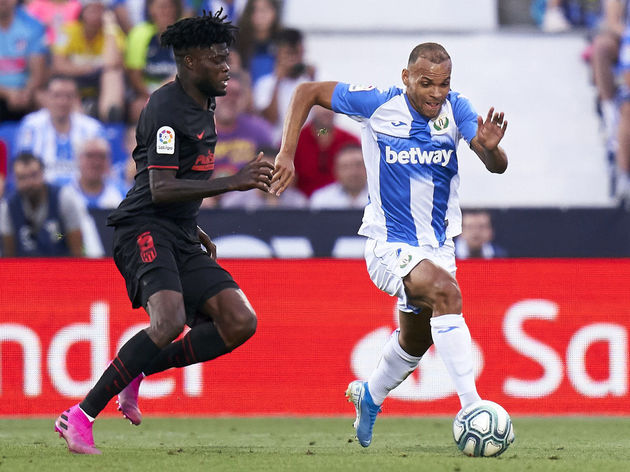 Atléti have won the last two games by a single goal to nil and will look to gain yet another ​La Liga victory over Sunday's opponents. Rather shockingly, Atlético currently find themselves closer to Real Betis - who are 12th place in the league - than they are to ​Real Madrid in second place.

The story of Atléti's season has been one of inconsistency and a failure to capitalise on what was an excellent summer transfer window. Simeone brought in the likes of Renan Lodi, Felipe, Kieran Tripper, Mario Hermoso, Marcos Llorente and João Félix, but have struggled to find form under the guidance of Simeone.

If Los Rojiblancos continue with their current form then they are in danger of being caught by the chasing pack of Getafe, Sevilla and Valencia and may even fail to qualify for the 2020/21 UEFA Champions League. Leganés face an uphill battle if they are to retain their place in Spain's top flight following an extremely poor start to the 2019/20 season.

Lega have amassed the same amount of wins as the number of letters in their shorts' sponsor, and even KFC are able to deliver most weekends. It should come as no surprise that the south Madrid side have scored the fewest goals in the competition (16) and have conceded the second most of any team (33).

Aguirre will need to find it within himself to motivate his squad and turn their season around, and what better way to do that than with a first win against Atlético Madrid in 18 years?

Atlético are in unfamiliar territory. They are used to contesting until the final day in La Liga and taking a place on the podium come the end of the season.

Leganés, however, are staring relegation in the face and have so far been unable to alter their fate despite some positive performances in recent weeks. With Atlético having the comfort of a home pitch and the crowd roaring them on, they should quite comfortably see off Sunday's opponents. However, with Simeone's men falling to a shock defeat against minnows Cultural Leonesa in midweek, nothing is a certainty.