Liverpool defender Virgil van Dijk has urged his team-mates not to let their standards slip after his side's hard-fought ​2-1 away victory over Wolves.

​Roberto Firmino's late winner meant the Reds have now won 22 of their opening 23 Premier League games, extending their unbeaten run in the league to an astonishing 40 matches. Jürgen Klopp's side are now 16 points clear with a game in hand over current champions Manchester City, and look certain their wait for a maiden Premier League crown, barring a sudden disastrous run of form.

Liverpool were tested by Wolves during their clash at Molineux, and that's prompted Van Dijk to claim that Liverpool's players must not relax and think the job is done.

However, Wolves proved a stern test for the Champions-elect, and Van Dijk refused to accept that the club's 30-year wait for a Premier League title is something they can afford to relax about.

As quoted by the Mirror, Van Dijk said: "You never feel unbeatable," before adding, "Anything can happen. There were moments against Wolves when things could have been different. 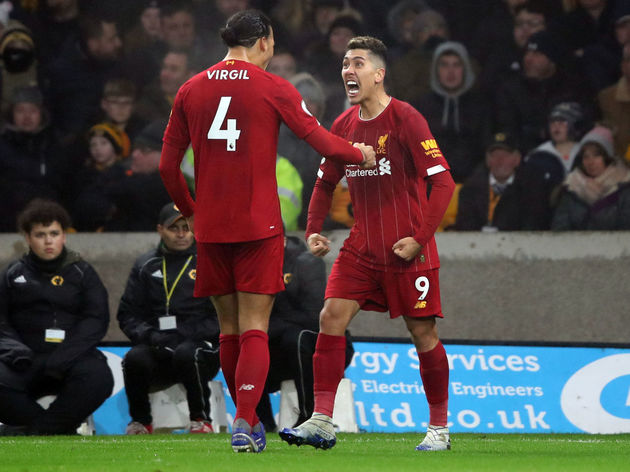 “They could have scored a second. We always feel we have to keep working hard. We just try to keep improving. Things are going good at the moment and everyone is in a good situation.”

After being pipped to the title by a single point last season - despite racking up 97 points - Liverpool know how important it is to maintain high standards until the bitter end, something Van Dijk was keen to emphasise as he continued. He also acknowledged the fact that people may want to see the Reds fail, but he - and the rest of the players - are determined to focus.

"We were very unlucky [last season] because City were a little better than us. We have to just accept that. So we set out to win it this year.

"The outside world can have their opinions but we know how this football world works and there are a lot of people who want to see us fail. But we just want to keep going and improve on what we are doing and we'll stay on the road we are on."

Jurgen Klopp's side now only need nine further victories to ensure they will lift the ​Premier League trophy at the end of the season, and can even afford to lose six of their remaining 16 games - a feat that is extremely unlikely.