Record-Breaking Erling Haaland Isn't a Flash in the Pan, He's the Key to Dortmund Winning Trophies

​Even for the most optimistic of Borussia Dortmund fans, Erling Haaland's ability to hit the ground running in the Bundesliga has been nothing short of extraordinary.

The Norway international came off the bench to score a hat-trick on his debut against Augsburg, while two goals in front of the Yellow Wall at Mario Gómez didn't score until his third season as a Bundesliga player, while Robert Lewandowski needed nine games and the legendary 90min's 50 Greatest Footballers of All Time series

Erling Haaland is the first player in @Bundesliga_EN history to score 5 goals in his first two games. He did it in 57 minutes.

Borussia DortmundBayern Munichinitially throw the Black and Yellows back into the mix for a shot at the title.

It was a pretty standard Hinrunde for the club too.

Pre-season aspirations of finally challenging for the league title again were dealt an early blow when Borussia Dortmund lost to Union Berlin on matchday three, and it looked for a long time that the Meisterschale would be going to Bayern Munich (again) or, even worse for fans, to Leipzig.

As far as the DFB-Pokal and Champions League are concerned, Dortmund have struggled against Werder Bremen over the last few years - they haven't knocked Die Werderaner out of the cup since 2008 - but Florian Kohfeldt's side will be light work compared to their opponents in Europe, Paris Saint-Germain. 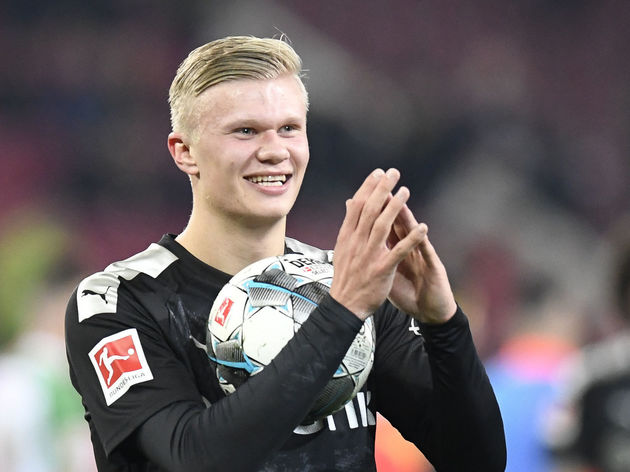 He might have broken records in less than an hour in the Bundesliga, but Haaland's quick adaptation to life in Germany doesn't mean Borussia Dortmund are automatically contenders once again.

What the 19-year-old will do, however, is bring an aura to their attack that's been lost for almost a decade, which will help to bring out the best of Dortmund's other attacking players and leave them in the best possible place to mount a late charge for a trophy.