​Liverpool's late victory away to Wolves on Thursday night put the Reds an incredible 16 points clear at the top of the Premier League table. However, Jurgen Klopp insists he is not thinking about relaxing, even claiming the thought of losing games makes him feel physically sick.

The Reds took an early lead against Wolves at Molineux as Jordan Henderson headed home from a corner. However, Sadio Mané went off injured in the first half and Klopp's side faced heavy pressure in the second half, as Raul Jimenez levelled.

However, Roberto Firmino proved the hero on the night, scoring an 84th-minute winner to take the Reds season record to played 23, won 22. ​Liverpool maintain an incredibly comfortable cushion over their nearest challengers Manchester City and Leicester City, but Klopp is not getting complacent - invoking some graphic imagery to hammer home his point.

After being told by ​BT Sport's Des Kelly in a post-match interview that Liverpool can afford to 'lose six games and still be crowned champions', Klopp responded:

Speaking in his press conference Klopp added that he wasn't even aware that the victory had put his side 16 points clear at the top of the table. 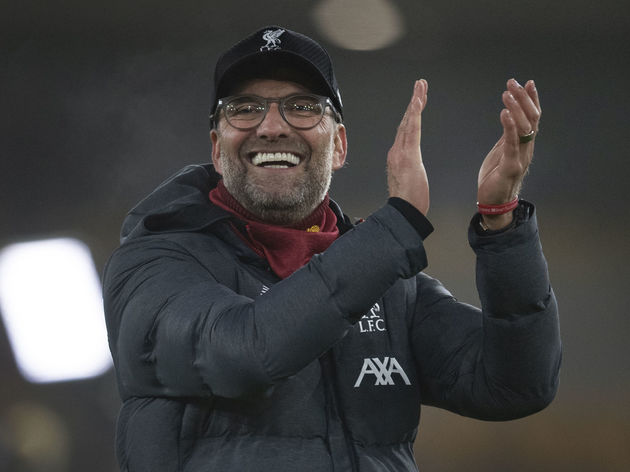 He said, via ​Goal: "I had to ask exactly how many points clear we are, that's the truth. I really forgot it in the week, with the number of games, I didn't think about it.

Next up for Liverpool is the FA Cup fourth-round clash with League One Shrewsbury Town (29/1), before travelling to West Ham for their Premier League game in hand three days later to round of January.

They may have to do so without Sadio Mané, with ​Klopp coy on the forward's injury.