José Mourinho is already facing 'growing unrest' in the Tottenham Hotspur dressing room, as his players have been left frustrated by his out-dated training methods and public attacks of teammates.

failed to win in any of their last four games, suffering defeats at the hands of Liverpool and Southampton, while also labouring to draws with Norwich and Watford. 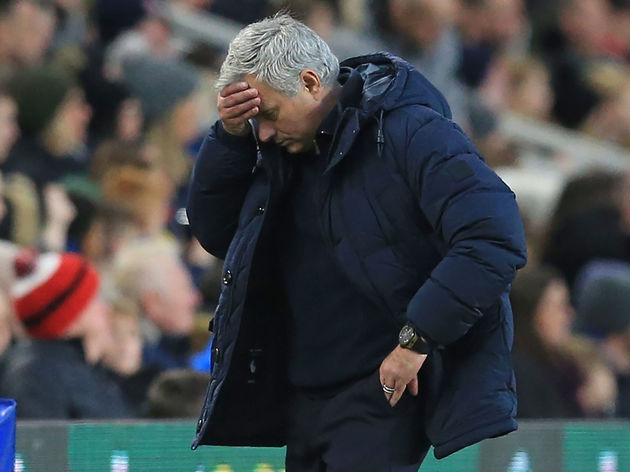 The drop-off in form has raised concerns among the senior figures in the Spurs squad, and ​The Sun reports that his players are growing weary of the Portuguese coach's approach - after only two months in charge.

Mourinho's training methods of 'long balls, flick-ons and and throw-ins' have been described as 'lower-league' sessions, especially when compared to the revolutionary and forward-thinking approach of previous manager Mauricio Pochettino.

The ​Spurs boss has also come under fire from his players for his public humiliation of record signing Tanguy Ndombele, who was criticised by his boss for his unwillingness to play through the pain barrier.

Mourinho hinted that the midfielder was 'not injured, but not feeling in a condition to play' against Brighton on Boxing Day, fuelling rumours of a rift between their summer signing and the coach. ​Sportsmail also claims that full-back Danny Rose had a heated exchange with Mourinho after the defender was left out of Spurs' squad that faced Watford. The 29-year-old went in search of an explanation from his coach for his exclusion on Friday, before confronting his boss once again on the day after the stalemate with the Hornets.

​Rose's frustrations appear to be echoed by the rest of the squad, which is becoming frustrated by Mourinho's basic style of football. Spurs had made up ground on the top four when the ex-Chelsea boss was appointed as head coach, but they have since fallen away from the Champions League spots, languishing nine points behind the fourth-place ​Blues.