Reece James & Callum Hudson-Odoi: A Partnership Made in Cobham Destined for the Three Lions

Chelsea’s youth revolution has been a sight to behold for Blues fans, one that has merely been a dream for years. The club’s renowned academy has produced some incredible talent, but for the large part of the century they never got the breakthrough they deserved at Stamford Bridge.

This season, it all fell into place thanks to a blessing in disguise. The transfer ban slapped onto the club played a part in Maurizio Sarri’s departure, and with those two factors in place, Chelsea turned to club legend Frank Lampard to take over the reins for the foreseeable future.

With Lampard at the helm and no signings permitted, the injection of academy starlets into the ​Chelsea first team was inevitable. Fikayo Tomori and Tammy Abraham were first to break through, with the latter enjoying a particularly successful seas/on with 15 goals to his name. One of the biggest breakthroughs was Reece James, an immensely talented defender who had just won Player of the Year on loan at ​Wigan Athletic. Since making his debut in September, he has taken Chelsea by storm, with his outstanding crossing ability and strength on the ball making him one of the Blues’ players of the campaign.

Another star who was already in the first team but returned in style is Callum Hudson-Odoi, who remarkably recovered from his Achilles injury in just five months. The 19-year-old came through last season but was limited to cup appearances, with Sarri only awarding him his first league start last April.

James and Hudson-Odoi almost failed to cross paths again, with the latter linked with a move to ​Bayern Munich all summer. But it was fate that the two reunited in the first team, both coming in at the perfect time. They have found their way into Lampard’s setup now, but their partnership began long before.

The English duo have been playing together for years. Coming up through the academy together, James and Hudson-Odoi were part of the 2017 FA Youth Cup winning side, both starting the second leg of the final at Stamford Bridge. Chelsea and ​Manchester City both went into that game neck and neck, having battled to a 1-1 draw in the first leg. However, it was the Blues who came out on top, and emphatically so, winning 5-1 and with Hudson-Odoi getting on the scoresheet with a sublime solo goal.

That was when they caught the eye of many for the first time, and they continued to impress within the academy en route to the first team. Fast forward two-and-a-half years, James and Hudson-Odoi have developed a formidable partnership, though only when the latter is on the right wing rather than his favoured left.

It seemed a bold move from Lampard to play Hudson-Odoi on the right, but recent performances show that it was one of his best tactical moves of the season. The England international looks free and dangerous when he’s there, with two goals in the last three games he has played on the right.

If Hudson-Odoi on the right isn’t exciting enough, James behind him at right-back makes that side of the pitch a key threat. The two combine so well together, with their flair, strength and power causing huge problems for opposition defences. To put it simply, Chelsea are sorted on the right flank for years.

The best images that captured @ReeceJames_24's rise to the top... 

Their strong performances this season prove that they work brilliantly as a pair, and it’s one that can be around for years to come. Captain ​Cesar Azpilicueta could soon be approaching the twilight of his career at 30 years old, yet he has flourished when moving over to left-back to accommodate for James.

The same can be said for right wing, with Chelsea’s two options there in similar situations to Azpilicueta. ​Willian and ​Pedro are 31 and 32 years old respectively, and with both of their contracts expiring in the summer, they may be on their way out if Hudson-Odoi is the future on the wing.

James and Hudson-Odoi have been excellent together this season, proving what they can do together at Chelsea. Seeing them play together is a privilege, and it could be a partnership we could be set to see for England in the very near future.

With the European Championship right around the corner and Southgate needing to make key decisions for his final squad, the Chelsea duo are in strong contention to make his Euro 2020 23. Hudson-Odoi has already earned three caps and impressed on all occasions, whereas James is awaiting his first senior call-up. 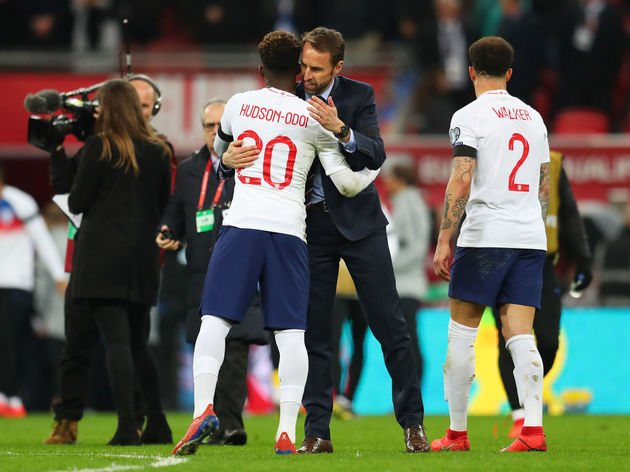 Southgate will surely have an eye on Stamford Bridge, and with how the pair are playing now, they deserve a chance to show what they can do on the international stage. England have warmup friendlies against Italy and Denmark in March, and that could be the opportunity they need to prove themselves.

James and Hudson-Odoi are destined to play together at Chelsea for years to come, and if it proves fruitful enough then England will be calling sooner than later. It may be ambitious and a reality far in the future, but what better way for the youth revolution to take the nation by storm?