The first 45 minutes was a cagey affair, as both sides struggled to create any meaningful opportunities. Brighton took the lead on 38 minutes however, when Leandro Trossard crashed an excellent effort across Pepe Reina and into the net, following a mazy run by Neal Maupay. The second half continued in the same vein as the first, with Brighton controlling the pace of the game and Villa offering very little going forward. But the visitors somehow grabbed a foothold in the match with 15 minutes left to play, when Grealish was given space in the penalty area and lashed a fierce left-footed strike beyond Mathew Ryan.

Brighton pushed to restore their lead, but Reina made a smart save to deny Maupay in the dying minutes, and the game ended all square.

​Brighton's opening goal proved just how quickly the pendulum can swing in a Premier League match. The hosts had stamped their authority on the match in the opening half hour, seeing plenty of the ball and creating the better chances of the two sides. But their good work was almost undone in the blink of an eye. 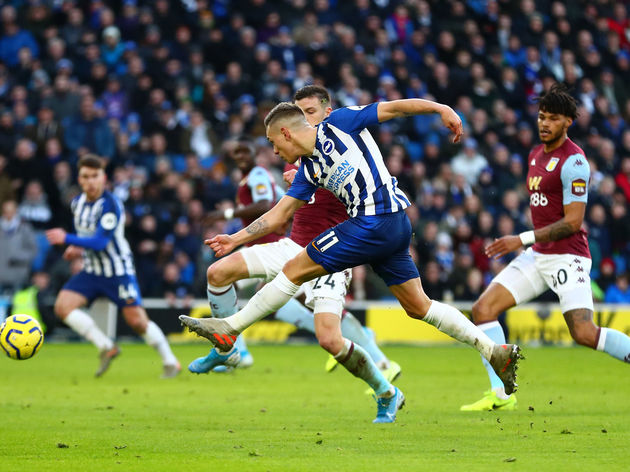 Grealish got the better of his two markers, and bore down on Ryan with the goal at his mercy. To the entire Amex's shock, the Villa captain missed. Grealish dragged his shot wide, and only seconds later, Brighton were breaking away with devastating effect.

Grealish could be forgiven for fluffing his lines, but he will know how crucial that minute was in the context of the entire game.

STAR MAN - When Davy Propper plays well, Brighton play well. The Dutchman absolutely ran the show in the engine room, and the graft he put in for his backline was pivotal in the Seagull's performance against the Villans. Propper's best work often comes in his own half, breaking up play or stopping the opposition from running at the defence. The 28-year-old shielded his teammates superbly throughout the game, and he blocked off Grealish's path to goal on numerous occasions. Propper also provided a goal-saving clearance from a free-kick in the first half, and his energy and relentlessness was completely unparalleled. He may not get all the headlines, but Propper will gain all the plaudits from his manager and teammates.

Another worrying display from ​Aston Villa on Saturday afternoon. If their lack of defensive stability is a concern, then their inability to construct meaningful efforts at goal should be the first priority in the transfer window. Villa failed to notch a single shot on target in the opening hour of play, and the entire team looked disjointed from back to front. Villa spent big money in the summer to build a squad capable of battling it out in the top flight, but the majority of the signings have not been up to the task. The centre of midfield is a serious issue, with the likes of Marvelous Nakamba and Douglas Luiz unable to control the tempo of games. With problems all over the pitch, Smith must be losing faith in his side's survival hopes.

They do have one saving grace however: Jack Grealish.

STAR MAN - Has there ever been a team more heavily reliant on one man than Villa and Jack Grealish? The talismanic midfielder has carried his boyhood side to the position they find themselves in now, but it may not be enough without the support of some talented additions around him. The captain's heart and desperation to succeed is undeniable, and his work-rate and endeavour matches his determination to avoid relegation. Grealish got his reward in the second half, smashing a wonderful finish beyond the Brighton keeper to level the scores, and the goal sparked wild celebrations between the player and supporters.

The 24-year-old wasn't ready for the demands of the Premier League during his first stint in the top-flight, but he may well have already outgrown his beloved club.

Brighton follow up one relegation six-pointer with another, as they travel to the Vitality Stadium to take on an out-of-form ​Bournemouth.

Villa will be desperate to propel themselves out of the relegation places, but Smith's men will face a difficult task when they host a much-improved ​Watford on Tuesday night.