Everton came away with a point despite a disjointed display on Saturday afternoon, as they drew 1-1 with West Ham at London Stadium.

West Ham had the ball in the back of the net early on, but Robert Snodgrass was offside when he made the run en route to finishing.​ Sebastien Haller then had a huge chance to put the Hammers in front, but Jordan Pickford saved well from close range to keep it goalless.

The Hammers finally got the goal they deserved on 40 minutes, when Issa Diop delightfully headed home from Snodgrass' excellent cross. The Scotsman sent a tantalising ball into the box, before Diop glanced the ball into the bottom corner to give the hosts a thoroughly deserved lead.

With West Ham seemingly heading into the break in front, Everton struck back to stun the hosts. Luca Digne's corner was knocked on by Mason Holgate, and Dominic Calvert-Lewin was there at the back post to head it in and make it all square going into the break.

Here's the breakdown of the action. ​West Ham began the game full of life, with every attack full of energy and purpose in an impressive start. They were on top from the first whistle, though as the first half developed their energetic start translated into wasted chances and missed opportunities.

The Hammers finally managed to capitalise and go in front, but their lead lasted just four minutes before they were caught out from a corner. That goal was their last spark of brilliance, with the second half display deflated and underwhelming without any real drive from then on.

West Ham could've easily won the game, but the better team throughout the 90 minutes were wasteful and lost their momentum after Everton's equaliser. David Moyes will be deeply frustrated, as it's just one win in five league games for the Hammers.

STAR MAN - Any creativity from the hosts came through Robert Snodgrass, whose pinpoint crossing resulted in their only goal of the afternoon. The Scotsman had a very strong first 45 minutes, and while he faltered along with his teammates after the break he remained their brightest spark. Despite having three wins in their last four league outings, Everton didn't seem up to scratch. The Toffees were on the defensive front straight away and found themselves behind through a nicely worked goal, an outcome that had been inevitable forthe whole game. Everton showed good character to stay focused and equalise just four minutes later, but there was no sign of inspiration when they came out for the second half. Carlo Ancelotti's side still looked as deflated and underwhelming as before, in what was frankly a poor performance.

While the display was far from pretty, Ancelotti will be content with the point and will take the result. Everton were far from their best and showed their flaws in east London, but the draw could prove crucial in the long term wherever the Toffees end up in the table.

STAR MAN - Everton wouldn't have come away with the point if it weren't for ​Jordan Pickford. The England number one made some outstanding saves throughout the game, with his sharp reflexes proving crucial for the visitors who only have Pickford to thank for the result.

Great save from Pickford. I know he has his critics but I think he’s great and we’d struggle to get better than him.

Pickford reminding everyone of his class today. Could easily be 3-1 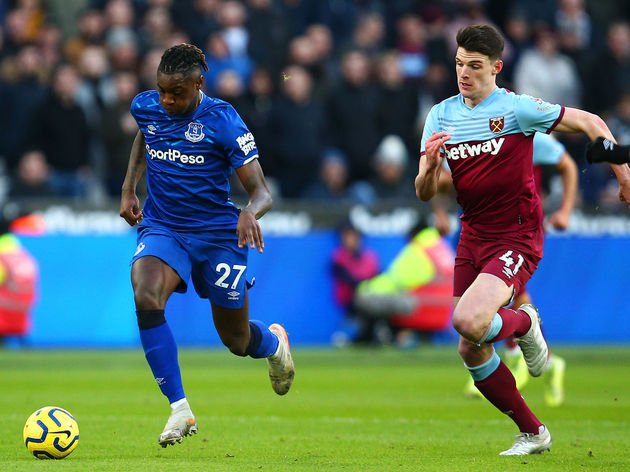 It's midweek action up next for both sides, as West Ham travel to high-flying ​Leicester City on Wednesday. The Hammers return to the London Stadium next Saturday, welcoming Championship side ​West Brom to east London in the FA Cup fourth round.

Everton will host ​Newcastle at Goodison Park next Tuesday, with the two just a few points apart in the middle of the table. Their FA Cup exit means the Toffees have 11 days before they're back in action, making the trip down to a resurgent ​Watford side on 1 February.