AC Milan look to record three straight wins as they host mid-table side Udinese at San Siro on Sunday.

I Rossoneri have endured yet another mediocre campaign so far. However, following the re-signing of Zlatan Ibrahimović, the team have seen an upturn in performances and results. The 18-time Serie A champions enjoyed a 2-0 away win against Cagliari before cruising past SPAL 3-0 in the Coppa Italia round of 16 on Wednesday. Udinese, who reside two places behind Milan, have enjoyed three successive wins in the league although fell short against Juventus in the Coppa Italia last time out. I Bianconeri have lost just one of their last five Serie A outings, also coming at the hands of Juventus, but have enjoyed wins against Cagliari, Lecce and Sassuolo.

With just one point separating the two sides ahead of kick-off, here is 90min's preview for Sunday's fixture.

Newcomer Asmir Begovic may make his debut for Milan following his transfer from ​Bournemouth as Gianluigi Donnarumma continues to be sidelined due to an ongoing thigh injury.

Lucas Biglia, Ricardo Rodriguez, Léo Duarte, Mateo Musacchio and Davide Calabria remain absent, meaning Andrea Conti and Simon Kjaer - who is set for his ​Serie A debut for Milan - should feature in defence. Luca Gotti finds himself in the lucky position of having just a single first-team injury ahead of his side's trip to San Siro. Centre-back Samir is the only absentee with a meniscal injury, although defensive midfielder Mato Jajalo is at risk of suspension if he picks up a fifth yellow card against Milan.

Udinese have already tasted victory over I Rossoneri this campaign, having won the season opener by one goal to nil at Dacia Arena. In the last 31 meetings, the honours have been relatively evenly split with ​Milan recording 14 wins to Udinese's 11, with the remaining six games ending in stalemate. 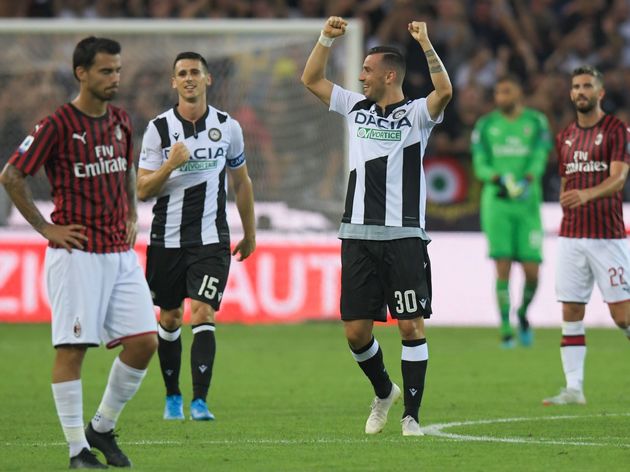 The last three meetings between the two sides at San Siro have seen a win for either side and a draw, with Udinese's away win coming back in the 2016/17 season, although that is I Friulani's first win at the Meazza since May 2007.

Despite their recent form, Il Diavolo have struggled at home in the league and have recorded three home draws on the trot against ​Napoli, Sassuolo and Sampdoria with only one goal scored in those games.

While this alludes to Milan's inability to find the back of the net (and perhaps why they purchased a 38-year-old Ibrahimović), I Rossoneri have recorded the same number of clean sheets as city rivals Inter (seven), meaning they are more than capable at the back. Udinese find themselves in a similar position having also recorded seven clean sheets this season, but have scored just 17 times in 19 Serie A games thus far as Udinese's centre-forwards have found the net just ten times between the three of them.

With both sides leading the way in terms of clean sheets in the league, the suggestion is that Sunday's fixture will be a tight, scrappy contest light on goals. However, with Milan and Udinese starting to hit form, both sides will be eager to claim all three points.

Having lost the opening game of the season which set the tone for their poor first half of the season, Milan will be keen to enact revenge on Le Zebrette and get the second half of their season off to the best possible start.