Lecce vs Inter Preview: How to Watch on TV, Live Stream, Kick Off Time & Team News

​Inter will be looking to return to the top of Serie A ahead of Juventus' game with Parma as they travel to Lecce on Sunday afternoon.

I Nerazzurri dropped two points at home to a relentless Atalanta side last time out in the league, settling for a 1-1 draw. But if it wasn't for the visitors' wastefulness in the final third and Samir Handanovic's penalty save late on, Antonio Conte's men would've walked away with nothing. While their intense and suffocating nature has constantly resulted in fast starts and early leads, Inter have often been pegged back late on in games as they seem to run out of steam in the second period. If they are to mount a serious Scudetto challenge in the second half of the season, Conte will need to find a more sustainable way of playing against Italy's premier sides.

Nevertheless, they'll be hoping to get back on track against an out of sorts Lecce side - who have lost their last four and are winless in six. Their woeful form has seen them slip to 17th, just one point above the relegation zone.

Fabio Liverani's men will have to start turning draws - they have the joint-most draws in the league - for the remainder of the campaign if they want to remain in Serie A for 2020/21.

The home side will be without the injured This will be the 20th meeting between the two teams, and only the second since January 2012. Lecce won that encounter, taking them to a total of three victories over the 18-time Serie A champions.

Inter had beaten them 4-1 just two months prior, capping out an eight-game unbeaten streak versus the minnows. The Milan club have taken all three points on 13 occasions, with two draws completing the record. These two faced off on the opening matchday of the season at San Siro. On that occasion, goals from Marcelo Brozovic, Stefano Sensi, Romelu Lukaku and Candreva saw the Nerazzurri breeze past the newly-promoted side 4-0. It was a sign of things to come.

Lecce's recent form would suggest that they're in some serious trouble. Not only are they winless in six, but they've often been defeated or held by sides surrounding them in the table – Udinese (12th), Bologna (13th), Brescia (19th) and Genoa (18th) have all taken points off Liverani's side since the start of last month.

While they've proved they can score goals in the top flight, their inability to keep them out is a major issue. They've conceded 38 in 19 games - the joint-worst record in the league. 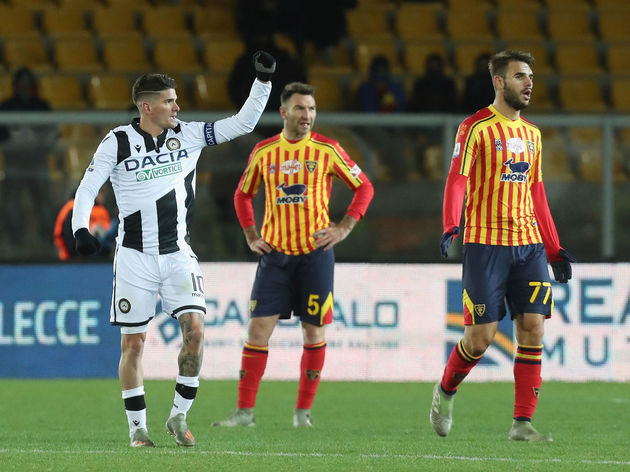 Inter, meanwhile, have gone unbeaten since their disappointing exit from the Champions League

Oh, and the Lukaku-Lautaro strike partnership is still the best in Europe. That helps.

Nevertheless, here's how the two teams have fared in their last five outings.

Despite Lecce holding Juve to a draw at home earlier in the season, it's hard to envisage anything but an Inter

The Nerazzurri are the healthiest they've been in months and the return of the superb midfield three will be a welcome boost for Conte. With Lukaku and Lautaro imperious and Lecce seemingly slumping, Inter should win this one with ease once more.