​With Christian Eriksen seemingly on his way to Inter - having been sitting in a cab to Stansted for half a year now anyway - all but one of their summer signings used with the money from Gareth Bale's sale to Real Madrid will remain at Tottenham.

Arise, Erik Lamela, the most expensive of the seven players that Spurs spent £109m on, this a club that is completely aware that money doesn't just grow on trees. Good job, lads.

Of those seven players, a maximum of three can count themselves as successes at the club, and even then there's caveats to how they fared in north London.

So, where are this collection of brilliant bozos now, and why did so many of them fail to make the grade at Tottenham?

Arrived From: Corinthians for £17m For the man who kicked off this coveted summer of spending ​to later be voted by FourFourTwo as ​the worst player in the club's history is poetic and exactly what you'd expect of Tottenham Hotspur.

After spearheading Corinthians to Club World Cup success against Chelsea and winning the Bronze Ball at the 2013 Confederations Cup with Brazil, ​Spurs fans were dreaming of the perfect compliment to ​Mousa Dembele and Sandro in midfield. It turned out that the only thing Paulinho complimented were the seething away fans after dropping 2/10 performances.

The Brazilian's physique seemed tailor-made for England, but his fleeting and often non-existent technique ensured he would never cut the mustard at Tottenham, and you realised that was a good reason why he was plying his trade in Lithuania earlier in his career.

Somehow he's played for Barcelona since he left White Hart Lane. What a stupid, stupid sport football is.

Arrived From: FC Twente for £7m The only thing most fans knew about Nacer Chadli upon his arrival was that he scored against them in the ​Champions League in 2010 - the expectations for him were so low that he could only be deemed a failure if he scored seven own goals against Arsenal.

Thankfully, he put one in the right net at the Emirates Stadium, and his shushing celebration following this is remembered fondly.

A good squad player who never kicked up a fuss. Absolutely no qualms over his signing or departure. A belated thanks for your service, Nacer.

Arrived From: Valencia for £26m In a way, Tottenham succeeded in finding a prolific striker when signing Roberto Soldado, as he was so agonisingly atrocious that he forced the club to start taking meme'd youngster ​Harry Kane seriously.

How a football player, a professional athlete who was as highly rated as Soldado was when he made this move could have lacked such pace, strength and composure is beyond mind-boggling - the brain has been removed, put in a plastic container, and furiously shaken by a gym lad thinking it's a protein shake.

Like all crap players in Spurs history, he still clings on to the allegiances he had in N17 and regularly plays up their positive moments on social media.

Arrived From: Toulouse for £9m

Post-Departure Assessment: Why did you turn on a generational manager you idiot To be fair to Etienne Capoue, there were few times where he dropped stinkers for Spurs - he did the job you'd expect of a £9m defensive midfielder.

He was probably alienated by Tim Sherwood playing him in all sorts of roles during his stint as head coach, but he became indefensible when it was reported that he was part of a dressing room mutiny against Mauricio Pochettino.

Capoue was swiftly dropped and shipped out to Watford, where he's found his level as a key figure for a midtable side. Good for you, Etienne.

Arrived From: Steaua Bucharest for £8.5m

Post-Departure Assessment: He's not even quick on FIFA 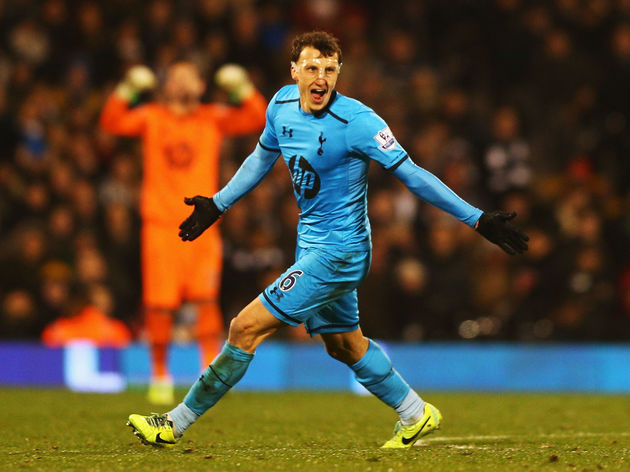 You were always guaranteed a laugh when Vlad Chiriches took to the pitch, and so you could argue that at least he brought entertainment value.

A promising start at Spurs was soon wiped out when it became obvious that this brave, fearless, progressive defender was actually just impervious to pain, and would aimlessly wander into midfield and make mistakes (such as purposely controlling the ball with his arm under no pressure in his own box) without any care for the consequences.

The only thing Vlad impaled was his own defensive line. Our hearts go out for Hugo Lloris who frequently had to deal with such nonsense.

Post-Departure Assessment: Needs to stop at the Belgravia Centre on his way out of London The only player who lived up and even surpassed their expectations on this list, ​Eriksen is well-deserving of a move to a club like Inter. While the manner of his departure is bitter, he made it known that he wanted a fresh challenge in the summer.

For several years, Eriksen was truly the lynchpin in Pochettino's high-pressing system, leading by example technically and physically. Spurs will be lucky to find a creative midfielder as proficient as the Dane anytime soon.

Arrived From: Roma for £30m One Spurs fan described ​Lamela as​ the 'winner of the Hunger Games', and there really isn't a better assessment of how the 'magnificent seven' have fared.

Lamela remains one of the most polarising figures at Tottenham - you either love his work rate and creativity, or hate his fitness record and consistency. After a couple of seasons at the club, it became evident that the Argentine wouldn't be a free-scoring wide forward like the previous owner of the No. 11 shirt, but he's been a useful squad player for several years.

If Levy tried to move him on, he would probably recoup the £30m fee paid for him, which may say more about the market, but still.

Maybe Lamela's lack of pace was always going to hinder how he fared in the Premier League, but he certainly adapted under Pochettino to show he could cut it in England.