Why We Mustn't Take Sergio Agüero's Brilliance for Granted

Of course, another superb Agüero performance was witnessed by the travelling fans at Villa Park, with ​the Argentinian securing a record-setting hat-trick This almost seemed like just another day at the office for the striker, who has now netted more Premier League goals than any other overseas player in football history - with 176 goals currently under his belt. Not only that, but the forward also broke the record for the most hat-tricks in the Premier League, taking his current tally to 12, exceeding Alan Shearer’s 11.

However, despite (or perhaps because of) his ridiculous consistency and his nature to score at least 20 league goals each season, we sometimes take Agüero for granted.

With the forward spending nearly a decade with ​Manchester City, Agüerohas become part of the Premier League furniture and it’s become easy to accept the performances he puts in week after week, game after game, as normal. However, Agüero isn’t - by any means - normal.

1️⃣0️⃣6️⃣ the best minutes per goal ratio in @premierleague history!

The young striker joined the Citizens back in July 2011 for a fee of around £35m from former club Atletico Madrid. Rumours claim ​John Terry had urged Chelsea not to sign him due to a perceived weakness in his movement. The striking prodigy had scored 74 in 175 in La Liga but was an unknown quantity abroad.

The following year, the lofty price tag had already been repaid - with the new signing scoring that goal in City’s 3-2 victory against QPR, claiming the club’s Premier League title in the fourth minute of extra time.

That goal, one of the most famous in Premier League history was his 30th of the season in 48 games.

It’s no surprise that ​Agüero won the Manchester City Player of the Year Award during that same campaign, having been an important component of that title-winning side.

Since becoming a crucial part of the squad, he has also won the Player of the Year Award in the 2014/15 season, as well as securing the Premier League Player of the Month Award on six occasions. 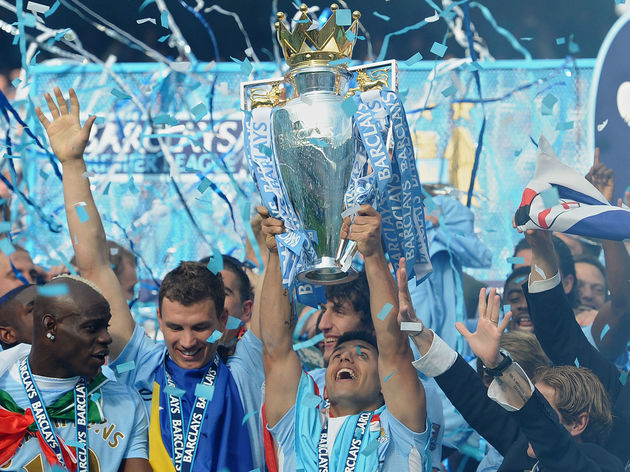 Although he has only won the Premier League Golden Boot once during his career, if we take a closer look at the stats, his goalscoring abilities become even more impressive.

Agüero has netted 20+ goals in a Premier League campaign, six out of eight seasons - and looks on course to make it seven from nine - while he still holds the record for the best minutes-per-goal ratio in Premier League history with just 106 minutes between strikes.

He might even have had more goals to his name, were it not for the odd unfortunate injury issue here and there.

Aguero has never been underrated per se - everyone appreciates what a quality player he is. However, when you see the same thing over and over again, it's easy to become immune to its brilliance. Other stars have come and gone; many who tend to make the headlines more often than the City star, who shies away from off-field attention, rarely does interviews and lets his feet do all the talking.

At 31, and showing no signs of slowing down, they could be doing the talking for a lot longer. Enjoy it while it lasts.