Can We All Just Stop to Appreciate How Bloody Fantastic Sheffield United Have Been - Please?

​Cast aside all the more prominent narratives in the Premier League at the moment.

Please, I ask, just for a few paragraphs.

Liverpool are going to win the league and are the best team in the world. Yes. Move on.

Leicester City look destined for Champions League football because it turns out Brendan Rodgers is a half-decent manager. Cool. Nice.

Manchester City are most certainly not going to win the league because their one good centre-half got injured. Right, OK. Next.

Chelsea have an exciting, young team fronted by a club legend who was surprised many. Lovely. But not what we're after.

Manchester United are showing no signs of progression under Ole Gunnar Solskjaer and are a very poorly run club. Headline-worthy stuff. But nah.

No. What you, I and nobody else are talking about enough - but bloody well should be - is ​Sheffield United. The eagle-eyed of you may have noticed the above list went in sequence. Indeed, no Arsenal or Tottenham mentioned. Why? Because they're not sixth in the ​Premier League table, Sheffield United are. One half of the Steel City, who were playing in League One not three years ago, are above a side managed by Jose Mourinho and within touching distance of the biggest club in the world football.

The extent of their success is unparalleled this season. No club in the division has a lower wage bill than the Blades. In

83 - Chris Wilder has won 83 league matches since being named Sheffield United manager prior to the 2016-17 season, the third most of any coach in England's top four tiers in this period behind only Pep Guardiola (101) and Jürgen Klopp (93). Faith. https://t.co/eYKqTGT5ZC

The famed 3-5-2 formation that has been implemented under Wilder since he took the reins has been criminally overlooked. It's tactical genius, and has resulted in an unheralded renaissance, bamboozling opposing sides all season and not drawing anywhere near enough credit.

He plays with outside centre-halves for crying out loud. This was peered at as a novelty in the early games of the season, but everyone has kind of abandoned that and let other narratives come to the fore.

Jack O’Connell and Chris Basham are given license to bomb forward, overlapping the wing-backs while the hugely underrated Oliver Norwood retains the ball in midfield in a controlled possession-based setup.

John Egan is Sheffield's Franz Beckenbauer, performing the sweeping role, and the wing-backs evoke their inner Cafu on a weekly basis. Goals and assists are shared among the team, with George Baldock and Enda Stevens - the wing-backs - registering eight goal contributions between them. 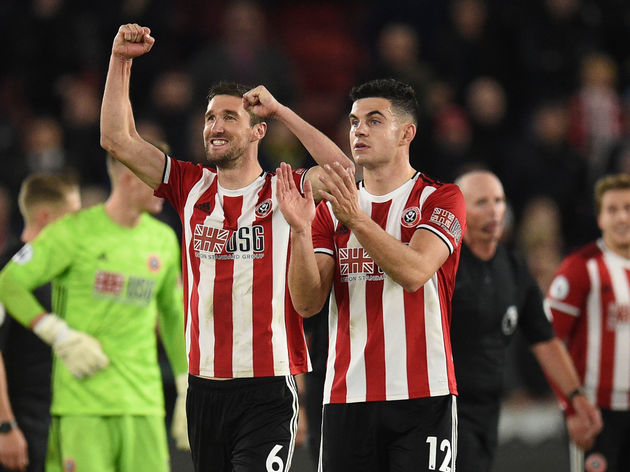 Wilder doesn't have the tools at his disposal to sign a world-class forward, so when Lys Mousset joined from Bournemouth having netted just five goals in three years, eyebrows were raised. Well, guess what? He's got five already this term.

David McGoldrick has missed just three games for the Blades in the league and has yet to find the back of the net with any of this 35 shots at goal. In any other side that record would be harrowing, he'd be dropped immediately and probably never need to lace his boots again. But Sheffield United are not 'any other side', they're a supremely well-drilled unit.

What moulds Sheffield together more than anything is not individual flair or beginner's luck - no side have had more goals chalked off by VAR this season - but a collective integrity that has every player pushing in the right direction and well-tuned to the demands set upon them. As with McGoldrick, you don't go 19 games as a striker and continue playing if you're not doing something right. And he clearly is, they're sixth for Pete's sake.

* Really good for his age and league.
* Really unlikely he hasn't scored at this point.

He may need to start a support group with Christian Benteke. pic.twitter.com/yQOHMSOdYZ

The fact that the first-team squad have gone through the campaign thus far without being riddled with injuries is beyond comprehension. But not if you're Sheffield United.

No, the players are brilliantly monitored by the club's conditioning department. Take a look at