​Midway through England's 3-2 victory against Sweden at Euro 2012, the greatest chant in footballing history began to reverberate around Kiev's Olympic Stadium.

The England supporters who'd travelled to the Ukraine had uncovered a universal truth - Zlatan Ibrahimovic is nothing more than a poor man's Andy Carroll. The ​Newcastle United frontman is a world-wide phenomenon, a God among men, and no one can match his powers. We are truly blessed to witness him in action.

6. The King of the Ponytail That clash between Sweden and England was the stage for a seismic showdown between two iconic ponytailed warriors. While Carroll scored, Zlatan failed to find the net and ended up on the losing side, so I think it's pretty clear who came out on top.

If there are any doubts about which of them is the more accomplished striker, just look at that superhuman leap from the Three Lions target man. He towers over the mere mortals that tried to deny him a goal.

A mesmerising cross from ​Liverpool teammate Steven Gerrard found Carroll charging into the penalty area, the forward making his markers look like children as he powered across the turf and buried a textbook header into the far corner.

If only we had him up front versus Croatia. There can be no argument about whether Carroll is a big-game player. His thunderous strike to put Liverpool 4-1 up against Oldham Athletic proves the Geordie comes good when his team needs him most.

Once again, it was Gerrard who assisted the GOAT, the captain bursting through the Latics midfield, before stabbing it across to the unmarked forward.

Carroll did the rest, walloping a first-time shot across the goalkeeper, who barely saw the ball as it soared beyond his fingertips.

The Kop could breathe a sigh of relief. Their talisman had done it again, and provided safe passage into the fourth round of the FA Cup. Take a bow, son. Over the years, Carroll has gained a reputation as something of a juggernaut, scoring long-range howitzers and domineering headers. This effort in the 2012 FA Cup final gave us a glimpse of his more elegant side.

With the Reds 2-0 down to ​Champions League winners ​Chelsea, they brought on the cavalry. Roberto Di Matteo's team expected an aerial bombardment, but it was the giant's skills on the ground that got Liverpool back in the contest.

After scoring the winner versus ​Everton in the semis, Carroll came on to give his team a lifeline in the showpiece event, turning John Terry inside out to free up some space. 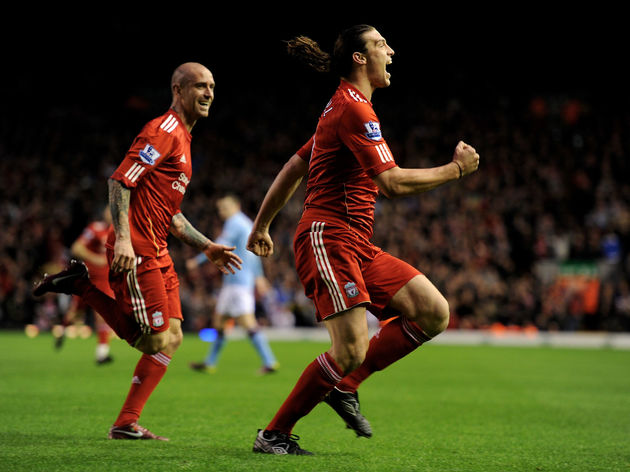 ​Manchester City weren't to know what lay in wait when they arrived at Anfield in April 2011, with Carroll still waiting on his first Liverpool goal at that point in time.

2. Why the Reds Signed Him In January 2011, Liverpool knew they had to get Carroll, whatever the cost. They'd come up against him just a month prior, and he'd been the standout figure in a 3-1 victory for the Magpies on Tyneside.

It was Alan Pardew's first game as Newcastle manager, so Carroll wanted to make a good impression. My goodness, did he make one.

Collecting possession 30-yards from the Reds goal, the youngster would have been surprised at the room afforded to him by the Liverpool backline. They wouldn't be making that mistake again.

Carroll unleashed a piledriver that clattered into the corner of the net, wrapping up the points as he did so.

He would soon join the Merseysiders for £35m, and who can blame them for paying that fee? This kid was destined to reach the top.

1. Is That Cristiano Ronaldo? Despite all the sarcasm that has come before, thisgenuinely breathtaking.

Cristiano Ronaldo scored one like this for ​Real Madrid back in 2018, and he got a standing ovation from Juventus supporters. For Carroll, it would be more appropriate if we all bowed before his greatness.

Michail Antonio slightly misdirected his dinked cross to the back stick, meaning Carroll had to quickly readjust his position. Of course, that was no problem for the forward, who connected perfectly with his overhead kick.

The ball swerved through the air, nearly bursting the net as it flew in. This was vintage Andy Carroll. This was the goal of a lifetime. This was his crowning moment. We'll never see anything like him ever again.