Mikel Arteta earned his first win as Arsenal head coach with a thoroughly deserved 2-0 win over Manchester United in the Premier League on Wednesday.

A nervy opening from the hosts was quickly forgotten as Sead Kolasinac's cut-back from the left flank found its way to Nicolas Pepe, who calmly slotted beyond David de Gea inside eight minutes. The Gunners then began dominating proceedings from there, with Alexandre Lacazette and Lucas Torreira both firing wide from promising positions.

8 - Arsenal have scored eight goals via corners in the Premier League this season, two more than any other team. Swingers. #ARSMUN pic.twitter.com/hUvUTfXUQD

Pepe then nearly grabbed his side's second with a bending effort from outside the box, but De Gea will have been glad to see the Ivorian's effort strike cannon off of the outside of the post. Their dominance did wield a second goal though, with Sokratis slamming home from a corner after De Gea parried the ball into his path.

United looked a much improved side as the second half wore on, with the hosts being pushed back deeper into their own half as the Red Devils began to dominate possession. Despite seeing plenty of the ball though, they failed to test Bernd Leno with any meaningful chances of note, in turn handing Arsenal their first win of Arteta era. Whether ​Arsenal could overcome that late heartbreak against Chelsea against the Red Devils was one of the key questions prior to kick off. It looked nervy to begin with, but as soon as Pepe's goal went in, Arsenal looked like a different animal to the one that had been so dire all season.

They were relentless in attack, assured in possession, and didn't give United a moment's peace on the ball. The biggest surprise of the first 45 minutes was that the score was only 2-0, with the Gunners spurning a host of chances to extend their lead and looking like scoring with each foray forward.

The second half was about holding onto their advantage, conserving energy and looking to hit United on the counter. It was very similar to their previous home clash against Chelsea, although this time, they had a two-goal cushion. 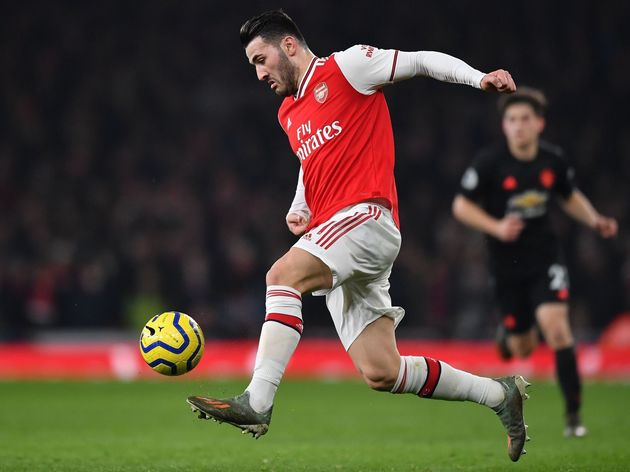 Bukayo Saka has performed admirably since slotting into the left-back role given Arsenal's injury crisis, but plenty of Arsenal fans will have been pleased to see Sead Kolasinac return to the starting lineup.

And pleased they would have been. The Bosnian was a constant menace down the left-hand side, causing all sorts of problems to Aaron Wan-Bissaka with some marauding runs. His link up play with ​Pierre-Emerick Aubameyang was excellent as well, and he was relentless all match until he was subbed after 69 minutes.

I don’t know what Arteta said to Maitland-Niles and Kolasinac but these two look like prime Roberto Carlos and Cafu. I’m not joking

Unai Emery made us believe Kolasinac is Shit. That man deserves to go for prison for crimes against football. After seeing the performances of both sides at the Emirates, it would have been difficult to ascertain which club was languishing dangerously close to the foot of the table and which one was fighting for the Champions League spots.

​United were limp and looked disinterested in the first half, with ​Marcus Rashford starved of any service up front and the defence struggling to cope with Arsenal's attack.

At the back it was anything but assured, with Harry Maguire and Victor Lindelof failing to live with the tenacity of the Arsenal frontline. There was need for a significant improvement after half time, and United did see more of the ball as the half wore on.

It was far more aggressive from the visitors, who began to assert themselves in the second half. However, it never really looked as if United would find that all-important breakthrough, with each surge forward yielding nothing more than a simple Bernd Leno catch.

Lindelof and Shaw not good enough defenders for a big six club and jury still out on Maguire. That’s why United won’t finish in the top four.

The inconsistencies of this United side remain painfully prevalent, with the showing they produced on Wednesday nothing like the outings they've shown away at Manchester City and at home to Tottenham this season. He's suddenly turned a corner at United and beginning to look like a totally different player, with Fred once again being the best of the lot for his side despite not excelling.

While his efforts didn't yield a positive result for his side, he looked maintained some control in the centre of the park. Many of his passes were sideways, but he was stunted by some determined Arsenal pressing.

United losing but at least Fred has been unreal

Feels like Fred is our only midfielder on the pitch

I tell you what’s bad. Fred being the best United player out there. I can’t fault him for anything. Shaw making Pepe look like 2018 Pepe. I’m tired. #ARSMUN

It's FA Cup action for both these sides next, with Arsenal hosting Leeds United at the Emirates on Monday while Manchester United travel to face Wolves on Saturday.