​United States forward Megan Rapinoe has revealed how supportive her teammates were during her well-documented mid-World Cup feud with president Donald Trump.

During the tournament, a video surfaced of Rapinoe saying: "I'm not going to the f****** White House," after being asked whether she would accept the invitation should the team triumph in France.

Trump responded in the only way Trump knows how - on Twitter - saying: "Megan should WIN first before she TALKS!"

Her comments continued to be brought up throughout the World Cup, with Rapinoe defiantly standing by her remarks.

It did not prove to be a distraction for ​Rapinoe or her teammates, with the 34-year-old scoring six goals en route to the USA defending their title.

Speaking to the ​Guardian, Rapinoe said: “Allie Long was like: ‘Duuuuude, this is so crazy, you’re a G, you took down the president!’ The whole environment was: ‘We got you. This is our player and we just have to roll with it.’"

Rapinoe is a famously politically outspoken player, using her platform to campaign for equal pay for the women's national team and to support Colin Kaepernick, the first American Football player to take a knee in protest of police brutality and racial inequality.

However, Rapinoe admitted that her mother was slightly less impressed by her feud with Trump. 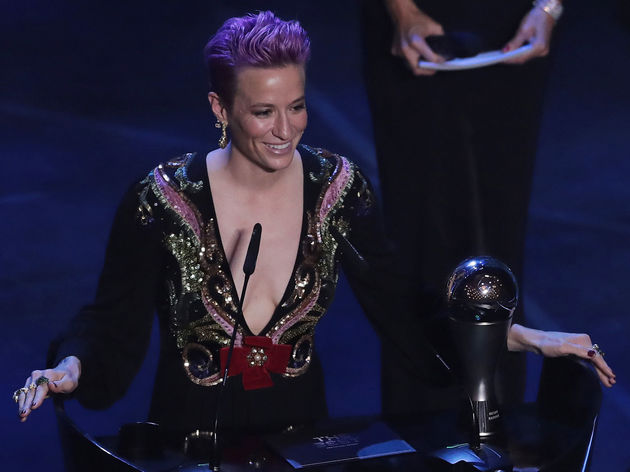 “My mom, I mean bless her, she was like: ‘Can’t you just stop? Why are you taking all this on all the damn time?’" Rapinoe added. "But this is what it is. It’s par for the course for me, I guess."

Despite her mother's objections, Rapinoe never considered backing down.