​Kylian Mbappé has 'liked' a tweet showing Trent Alexander-Arnold copying his celebration, after the Liverpool right-back took a step in front of Andy Robertson in the internal assist battle between the duo.

The 21-year-old was instrumental in a ​resounding win for the Reds over Leicester on Boxing Day, assisting two goals before putting the cherry on the cake with a terrific low finish to put the Foxes' title challenge to bed before the new year. 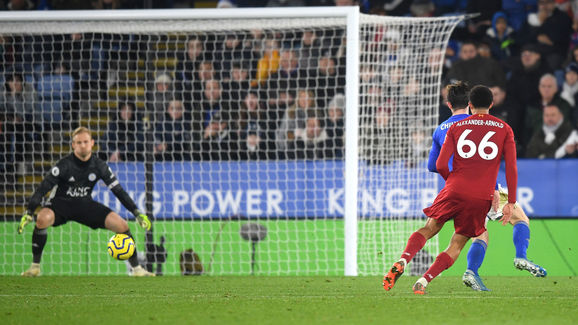 It was his second goal of the season, having also netted against Chelsea in September, and the right-back marked it with a celebration to remember - emulating ​Mbappé's iconic celebration as he crossed his arms across his chest in front of the Liverpool support.

It was perhaps a subtle nod to the nonsensical transfer speculation surrounding a ​Liverpool move for the PSG forward, and seems to have been taken in good humour by the Frenchman, who ​'liked' a tweet from Bleacher Report showing the parallels between the two celebrations.

Mbappé has scored 18 goals in 19 appearances for PSG this season, but while goals are nice for Alexander-Arnold when they come around, they are not the main priority.

The 21-year-old has been engaged in a friendly war of assists with left-sided teammate Andy Robertson in recent seasons, and with two more assists against Leicester, he left the Scot in his dust.

The right-back, of course, jumped on the chance to rub it in.