Liverpool captain Jordan Henderson isn't expected to have suffered from a serious injury in the Reds' 4-0 victory over Leicester, with manager Jurgen Klopp saying the midfielder is 'fine' in the wake of the match.

With the Premier League's runaway leaders plagued by injuries at present, there was real concern when Henderson - standing in for Fabinho in the 'number 6' role - was forced off following a nasty-looking collision with Ayoze Perez eight minutes from time.

The game was won by this point with all four of Liverpool's goals scored, but what initially looked like a sore injury to the captain put a dampener on things for the travelling support. It was a particular concern considering the intense forthcoming fixture schedule, with the Anfield giants facing Wolves at the weekend before the midweek visit of Sheffield United kicks off 2020, two days before an FA Cup Merseyside derby.

Speaking after the game, however, Klopp gave a reassuring update, saying the 29-year-old is 'fine', and suggesting his withdrawal was simply a precaution.

When asked if ​Henderson was OK, he answered, as per the ​club's website: "Yes. [It was a kick] on the shin.

“It was bleeding but he told me afterwards ‘I could have carried on!’, so obviously it is not so bad this time.” 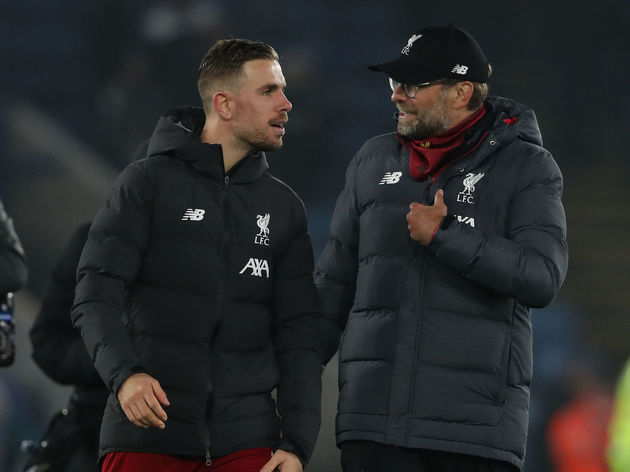 Henderson has lifted two trophies for ​Liverpool already this season, leading them to the European Super Cup back in August before helping clinch the Club World Cup in Qatar last week.

His performances in the Middle East underlined his importance to the Liverpool side, filling in at centre-half in the semi-final victory over Monterrey amid something of a defensive injury crisis, with Virgil van Dijk just missing out while Joel Matip and Dejan Lovren continued their rehabilitation.

His primary role is as the Reds' holding midfielder while Fabinho remains out, and with ​Alex Oxlade-Chamberlain joining the Brazilian in the treatment room, Henderson's continued availability will likely be invaluable ahead of a busy period.