Norwich vs Tottenham: Where to Watch, Live Stream, Kick Off Time & Team News

Tottenham will be eyeing the chance to move into a Champions League spot when they take on Norwich at Carrow Road in the Premier League on Saturday.

Spurs came back from a goal down at home to Brighton on Boxing Day to record a 2-1 win and another three points against the Canaries will move them ahead of Chelsea in fourth. Second-half goals from the ever-reliable Harry Kane and Dele Ali ensured Spurs bounced back from their 2-0 defeat to the Blues and put pressure on Lampard's side.

As for ​Norwich, Boxing Day was deja vu, a case of boss Daniel Farke seeing his team put in another commendable performance but come away with nothing to show for their efforts.

The Canaries were the dominant team throughout but failed to put ​Aston Villa to the sword, and the Midlanders snatched a home win courtesy of substitute Conor Hourihane's strike.

It was a defeat that saw Norwich sink to the foot of the ​Premier League standings and Farke's men now find themselves seven points adrift of safety.

With the fixtures coming thick and fast over the festive period, Canaries boss Farke may choose to make changes for the Spurs clash. Norwich will once again be without centre-halves Ben Godfrey and Timm Klose, who are both nursing knee injuries and aren't expected back until 2020. Meanwhile, ​Watford

José Mourinho has no fresh injury concerns ahead of the trip to Carrow Road, but he will be without Son Heung-min; who serves the second of a three-game ban after his red card against ​Chelsea.

The Canaries begin the weekend bottom of the Premier League, but there is something about such a scenario that often brings out the best in the Canaries, as they are unbeaten in six matches when starting the day propping up the table.

Nevertheless, in Tottenham they face a side against whom they do not boast a great record, having beaten them just once in eight Premier League meetings at Carrow Road.

Spurs will be looking to Dele Alli to continue his strong form if their good run in Norfolk is to continue. The England international has scored five and set up three goals in all competitions for Tottenham since Jose Mourinho's appointment, more than anyone else.

Norwich's three-year hiatus from the top flight means these sides last faced each other back in February 2016. On that day, a brace from Harry Kane and a Dele Alli strike sealed a comfortable 3-0 win for Spurs at Carrow Road.

Norwich lost by the same scoreline as Kane was again at the double, with Tom Carroll grabbing the third.

It's the most wonderful time of the year, but not if you ask Norwich. They have become masters at playing well without picking up points, and are rooted to the bottom of the table. They had chances aplenty against both Villa and at home to ​Wolves, but were unable to take them, a feature of their play that has seen the Canaries go without a win in December.

Farke's side hasn't picked up three points at home since mid-September, an unlikely 3-2 win over champions ​Manchester City.

However, since the Portuguese replaced Mauricio Pochettino, Tottenham have conceded 10 goals and have only kept one clean sheet in the league. 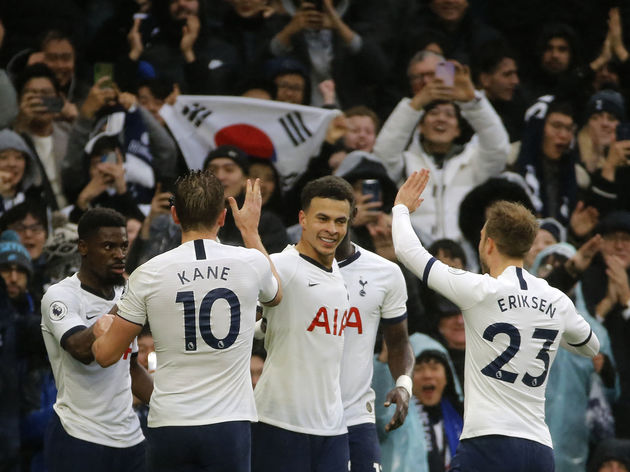 Given Mourinho's reputation for parking the bus, it's not what many would have expected but it does mean goals are guaranteed every time Spurs take to the field.

Here's how both sides have fared in their last five games in all competitions.

This time of year always springs surprises, given the number of games that Premier League teams are expected to play. But, if Spurs build on the second-half display against ​Brighton, it could be another miserable day for the Canaries.

Norwich have home advantage and that famous win over Man City to gain confidence from, but Tottenham will be determined to knock Chelsea out of the ​Champions League places.

Mourinho's men have only kept one clean sheet in nine, so the Canaries may well score, but Harry Kane has four in his last two against Saturday's opponents.