​Newcastle United full back Javi Manquillo is unlikely to be offered a new contract at St. James' Park when his current deal expires next summer.

The 25-year-old moved to Tyneside from Atletico Madrid in 2017, and has gone on to make 47 appearances since then.

But the three-year deal he signed under Rafa Benitez is set to expire at the end of the season, with the offer of fresh terms yet to be made to Manquillo.

And it now seems unlikely that Newcastle will offer him an extension, after local journalist Mark Douglas intimated (via ChronicleLive) that although Manquillo is perhaps worthy of an offer based on current form, the club's desire to overhaul their playing squad is unlikely to see one come his way.

Manquillo himself has recently suggested that he'd like to stay at the club, revealing his joy (also via ​ChronicleLive) at the recent birth of his son - who was born locally, rather than back in his native Spain.

The former Liverpool star said: "I'm happy in this city, and circumstances dictated he was born here," Manquillo said of his son's arrival.

"We could have had him in Spain but as I'm so happy and at home here, this was where he was born - so yes, I have a little Geordie now.

"Ever since my little boy was born, everything’s been going really great - phenomenally," he said earlier this month. "I decided at the time I’m happy here, and with the fact I’m so settled here, there was no doubt at any moment that we would have the birth here in Newcastle.

"I think the longer you stay anyway, the more attached you become to a place. I've been here quite a while, and I love the stadium, the fans, everything is fantastic - I feel very much at ease." 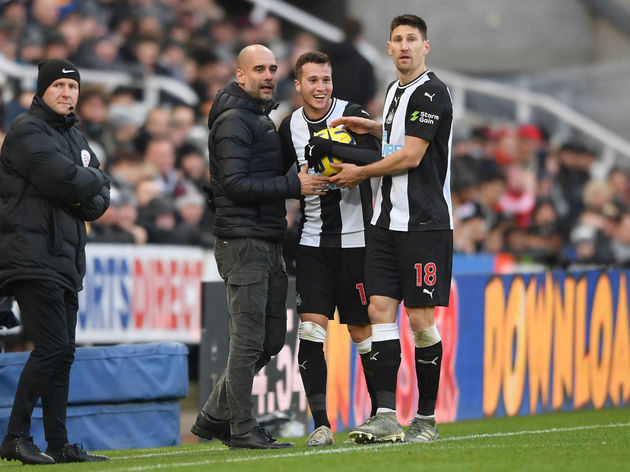 Manquillo's desire to stay certainly appears to be at odds with Newcastle's current thinking, though Douglas did continue by suggesting that he will not be the only player moved on next summer. Jack Colback and Ki Sung-yueng will depart, but Andy Carroll and Federico Fernandez are likely to be offered extensions, despite failing to engage in talks yet.

For now, Manquillo will hope to keep hold of his place in the side, having forced his way back into the starting lineup for the recent 2-2 draw with Premier League champions Manchester City.