The Belgium international's future has been the subject of intense speculation since early 2018, when Spurs opted to trigger an extension in his contract. The initial deal was to last until the end of the 2019/20 season, but opened up a release clause of £25m for the most recent summer transfer window. However,

​Manchester United and Roma were heavily linked with moves for the defender over the last couple of years, but Alderweireld has put an end to talk regarding his future by choosing to sign at Tottenham - under new manager Jose Mourinho.

"I'm very, very happy," Alderweireld told the ​club's official Twitter account. "I think no words can describe another couple of years here at Spurs, I think it's no place where I can't be happy.

"I'm honoured to play for this club and I'm a small piece in getting to the next level in a couple of seasons, to reach the Champions League season-in season-out and then going to the final as well, I think this is just the beginning of something big and something very exciting.

"People know my history, I played for Ajax and of course I have a lot of respect for the club but now I'm a Spurs player and cannot see myself playing for another team, I've got a love for the club. It feels like both ways - I think the club likes me, I love the club, the fans, the stadium, it's like I'm living some sort of dream.

"From the beginning when I came here I think they accepted me very well, and then of course it's like we're friends, that's very important too. I think the fans and the club can see this on the pitch as well that we really work for each other and want to achieve big things.

"We couldn't do the things we've done in the last couple of years if you don't have a very good group. We've come from young players to adults and it's time to be even better." Alderweireld insists that Tottenham are still in the hunt for a top four finish after a dismal start to the season which saw Mauricio Pochettino sacked.

"We want to get top four, I think it's important for the club to get Champions League [football] again, and we showed last season in the cup or Champions League we can beat any team on our day so [there's] exciting times to come and I think we're going in the right direction," he added.

The ​Evening Standard report that the new deal with be worth around £150,000-a-week, three times bigger then his previous wage.

He joined the club from Atletico Madrid in 2015 after a season-long loan at Southampton, and has gone on to make 181 appearances for Spurs.

The centre-back has been a key figure at the back since signing four years ago, and has been rejuvenated since Spurs appointed Mourinho as their new head coach last month. 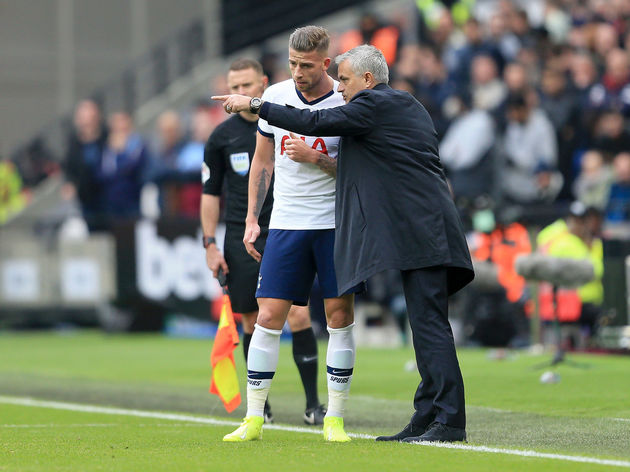 Alderweireld was one of three key Spurs players with their contract up at the end of the season, with Vertonghen and Christian Eriksen's deals both set to expire in June. The latter has been strongly linked with a transfer to Real Madrid for either a cut-price deal in January or for free once his current contract expires.

The tying down of Alderweireld will give Spurs fans encouragement that the pull of Mourinho is still as strong as ever.