Erling Haland is ranked 30th in 90min's European Player of the Year series.

In just 12 months, the towering Norwegian's reputation has soared through the roof, and he could soon be sealing yet another January transfer, but this one could be worth a ludicrous amount more than his first.

Still 19 years old, Haaland is the name on everyone's lips these days, and that's testament to his utterly astounding 2019.

Let's take a look at some of his best moments from the year.

Before the 2019/20 season started, Haaland was somewhat of a household name. However, he attracted pretty much the entirety of the limelight with a nine-goal performance for Norway Under-20s against Honduras in May's Under-20 World Cup. Even in his short Salzburg career, Haaland has enjoyed several dominant performances, but his finest showing came in a 7-2 victory over Hartburg back in September.

With a score like 7-2, you've probably guessed that Haaland enjoyed somewhat of a field day. The towering striker finished the game with three goals and two assists, in what was the first time that people realised that he was simply too good for Austrian football.

It was the sixth consecutive game in which he had scored. During that run, he bagged 11 goals and four assists.

How's that for stats?​ For any player, making it to the ​Champions League is usually the dream, and Haaland made his first appearance in the competition in September against Genk.

It was a pretty memorable one.

Haaland became the third-youngest scorer of a Champions League hat-trick​ as he fired his side to a memorable 6-2 victory. He had arrived on the European stage.

​Real Madrid winger Rodrygo went on to score a hat-trick afterwards, bumping Haaland down to fourth-youngest, but that's still a phenomenal achievement. With all due respect to the Austrian Bundesliga, the competition is hardly the highest level of football. However, scoring against defending European champions ​Liverpool is something else.

Haaland's Salzburg side clawed their way back from 3-1 down to level the score at 3-3, with the Norwegian netting his side's third just four minutes after coming off the bench. Not even one of the finest defences around could stop him.

It would end in heartbreak as a ​Mohamed Salah goal spoiled the party, but people were now aware ​of what Haaland could do. 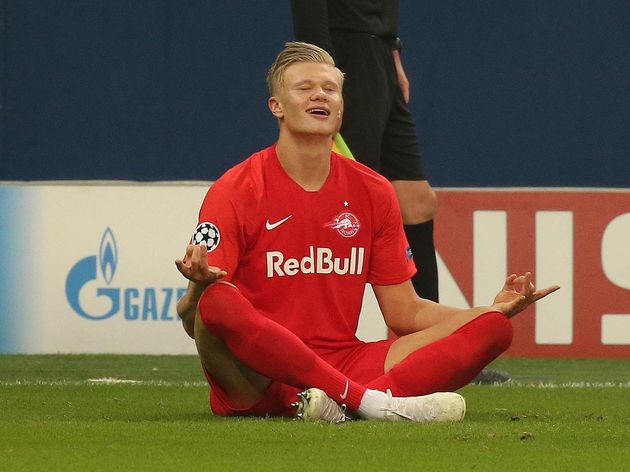 Haaland has enjoyed a historic year, and his brace against ​Napoli in October was one of the crowning moments.

He netted twice in a 3-2 loss, becoming only the second teenager in Champions League history to score in his first three games (the first being ​Karim Benzema, if you're wondering).

However, he did get his own record as he became the first player to ever score six goals in their first three games in the competition, eclipsing Didier Drogba's record of five goals.

Haaland then scored in the next game against Napoli, making him the first teenager - and fourth player in general - to net in four consecutive games. He made it five in a row soon after, but the fun stopped there as he drew a blank against Liverpool in gameweek six.