Real Madrid manager Zinedine Zidane has insisted that his side deserved to win Wednesday's Clásico with Barcelona after the sides drew 0-0 at Camp Nou.

Los Blancos had two strong penalty shouts - both on centre-back 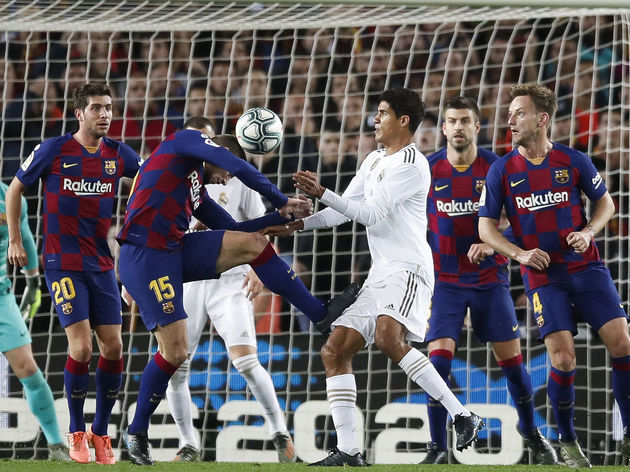 Speaking after the game (via ​Marca), Zidane was adamant that his side deserved more than just a point from the match, praising his players for turning up to Camp Nou and performing like the better team.

"I'm happy with the game, but we didn't score," he said. "When you have chances you have to put them in. You have to congratulate the players because they did very well. We played in the opposition stadium.

"Sometimes you get two or three [goals] and sometimes not. That's football. I'm not happy for the players, because they deserved more.

"The referee and the VAR have not given [the penalties] and I cannot do anything. The game is already over."

Zidane was not the only person to have been left frustrated by the VAR decisions. Captain ​Sergio Ramos also ​admitted he was annoyed, although he did accept that VAR works in both ways and could soon benefit ​Real instead.

"We have seen them at the break and they look pretty clear, they are both penalties, but it can't be changed anymore," he said, as quoted by ​Marca.

In the 18th minute of the game, Varane was caught with a high boot from Lenglet, and an image emerged on Twitter of what appeared to be Varane's leg after the collision, which was not deemed to be enough to warrant a penalty.

The draw means ​Barcelona remain top of the ​La Liga standings thanks to their superior goal difference, and Real must now move on and prepare themselves for the visit of Athletic Club on Sunday.