Liverpool 2018/19: The Season That Established Greatness and Made Champions League History

To take nothing from that Goliathan league effort, that saw Jurgen Klopp's ​Liverpool rack up 30 league wins out of 38 with just one defeat all season, would be a heartbreaking blow. Yet it would serve a second purpose; as the undercurrent for something even more remarkable.

A team that, just four years earlier, had been on its knees, with even qualifying for the ​Champions League looking like a dot on the horizon of ambition, would be crowned kings of Europe. It was owing to the efforts of Klopp and the reconstruction of the team undergone by Michael Edwards and the recruitment team. They had slowly pieced the side back together since the German's appointment in 2015, and in the year that preceded, they had unknowingly added the final pieces to the jigsaw.

The quadrangle of arrivals in the summer of 2018 - Alisson, Fabinho, Xherdan Shaqiri and Naby Keita - followed suit from ​Virgil van Dijk six months earlier, and completed a group that would prove to be generational.

The signs had been there in the second half of 2017/18. ​Mo Salah, Sadio Mané and Roberto Firmino had taken apart Manchester City three times over the course of their historic centurion season. That put them on the map as a potential challenger to the throne, and a run to the Champions League final suggested they had the mettle to mix it with the best in Europe. But all that said, come the summer of 2018, none could ever have predicted the masterclass in mentality the Reds would put on in the forthcoming campaign.

The pace was set from the off, as after after a thumping 4-0 victory over West Ham United at Anfield got things started, the domestic wins would keep racking up at an alarming rate. Six straight league wins greeted the Reds, and though points would be dropped to Chelsea, City and Arsenal in the first half of the season, those were the only occasions in the opening 20 games in which Liverpool failed to win.

That remarkable run was complemented by a fair, if mildly underwhelming, Champions League group campaign. Serious alarm bells would be rung by a 2-0 defeat away to Red Star Belgrade, and given that their two other away games also ended in defeat to Napoli in PSG, question marks were raised over the Reds' ability to last the distance away from home. Still, Anfield wins over each of their three opponents, concluding with a narrow 1-0 over Napoli in which Alisson proved the hero, were enough to see the five-time champions through on a better head-to-head than the Italians, and it was a very happy new year for Klopp and his men.

Their sole league defeat of the season came away to Manchester City on January 3rd, a defeat which cut their once-ten-point lead at the top to just four, and gave City the initiative to gradually, incrementally wear them down. Though they would have to finish the season with 15 straight wins to do so.

They didn't know it yet, but the league would prove a step too far for Liverpool on this occasion.

Europe, though; that was another story. 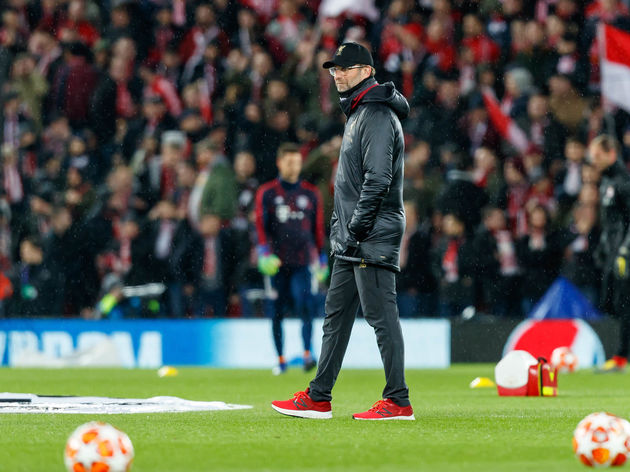 Still reeling from their heartbreaking defeat to Real Madrid a season earlier, the Reds showed a steely resolve to go all the way. Bayern Munich and Porto would be overcome, both initially tight encounters that ended in ultimately comfortable victories. The goalscoring heroics of their front three, as they so often did, proved to be the difference.

And then things came to a crushing halt, or so it seemed, with a trip to Barcelona. The Reds' biggest test yet ended with a 3-0 defeat that looked to have grounded them, and consigned them to another season without a major trophy to show for their efforts.

You'd have forgiven Liverpool for being downtrodden and inconsolable ahead of the second leg. Starting without Salah or Firmino (both injured) Liverpool weren't given a hope.

The message from Klopp was simple. Any other group of players would be finished at this stage; but because it's this Liverpool team - this humble, relentless, unbreakable Liverpool team -  they had a chance. And did that not just prove to be prophetic.

When Trent Alexander-Arnold's impromptu corner picked out Origi, who swept home before Marc-Andre ter Stegen knew what time of day it was, the scenes that followed will go down as one of the greatest in a long list of great moments in the history of Liverpool FC. It was the greatest ever comeback in a Champions League semi-final, and the rendition of 'You'll Never Walk Alone' at full-time, fans and players joining as one, was the moment that defined an era. The makings of something special had been in the works for 18 months, but this was the culmination, the coming-together moment that made it a reality.

Liverpool fans might have told you otherwise, but going into the final against Tottenham, there was no doubt as to who the winner would be.

In many ways it was a complete reversal of the final 12 months earlier - Liverpool, previously the hungry underdog looking to upset the odds, were now the heavyweight that had been there and done it all before. Tottenham would give it their all, but Liverpool winning this final was the Ragnarok that had been inevitable on the horizon since they conquered Barcelona. Ultimately, the final game of the season was far from entertaining, but that suited Liverpool: they were professionals when it came to winning bad games of football. An early penalty from Salah set the tone, and Origi's late second finished off a fairytale that the best fiction writers of our time will look upon with envy.

​USWNT 2019: The Off-Field Gamechangers Who Went and Won a World Cup As Well

​Manchester City 2018/19: The Treble-Winning Juggernaut That Smashed Re​cords for Fun