USWNT 2019: The Off-Field Gamechangers Who Went and Won a World Cup as Well

The US Women's National Team are the definitive football team of the 2010s.

Not the definitive team of 2010s football, that's still the current Manchester City hyperteam with their ground-based game and limitless reserves of cash, but rather the team who best represent how the whole world has experienced the decade.

Some teams, like that City side, Atleti in 2013/14, most of the other teams in 90min's all-decade list, are football-only ventures. Their scope in their own field is broad, but it is contained to their on-pitch ventures. They've had great generations in the past, and great sides. The '99ers are one of the best-known teams in American sporting history, and the squad that lifted the 2015 World Cup in Japan may be the best that the country has ever produced on the pitch.

The 2019 side – more than any of their predecessors – have been great off the pitch. And that brings us to this summer's World Cup.

The Americans came into the tournament as favourites alongside hosts France, who had beaten them 3-1 earlier in the year, but questions had been raised over their status as the team to beat. Alyssa Naeher had the gloves, but wasn't the sure and steady replacement for Hope Solo that manager Jill Ellis had, er, hoped.

Julie Ertz was the only nailed on starter in midfield, and in Crystal Dunn the USWNT had one of the most talented players in the tournament...playing out of her club position, at left-back. 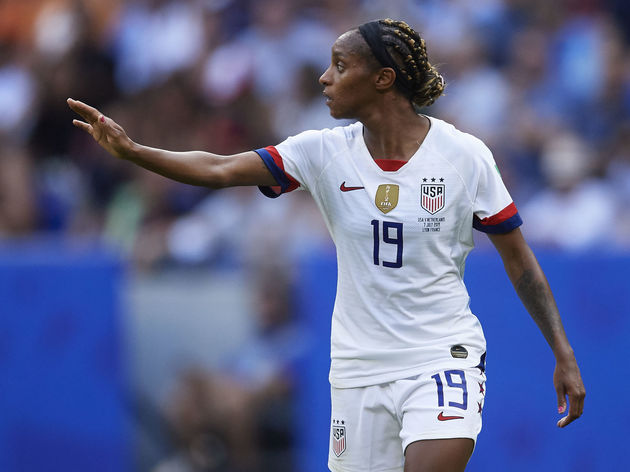 Meanwhile, stalwarts Becky Sauerbrunn, Megan Rapinoe and Tobin Heath were among the 11 players in the squad past their 30th birthdays. Questions marks all over the shop.

Then, in front of 18,591 people at the Stade Auguste-Delaune in Reims, they set World Cup records with a 13-0 win over Thailand. It was the biggest win in men's and women's World Cup history. Alex Morgan tied the all-time single game scoring record at the top tournament, going level with Michelle Akers (vs Chinese Taipei, '91) and Oleg Salenko (vs Cameroon, '94).

Qualification was wrapped up with a 3-0 win over Chile five days later, by a starting XI featuring just three members of the team who had started against Thailand. A more familiar side returned to play Sweden for the group victory, and duly completed a 2-0 victory. Going 18-0 in three group matches looked good, but it was pretty clear that the US hadn't been tested at any point. That came in the round of 16, against a physical Spain side who showed the rest of the tournament how to deal with the defending champions. Hassle them, harry them, keep them uncomfortable, test Naeher. It took a dodgy late penalty to put the US through, but they were off balance for the first time in the tournament.

The next day, the story which would dominate the second half of the tournament began. Football magazine Eight by Eight posted a little video clip from a pre-tournament interview with Rapinoe, in which she laughed that she wouldn't go to the 'f--king White House' if the US defended their title.

The clip was viewed over 11,000,000 times on Twitter alone in the 72 hours between it being posted and Pinoe leading her team out against France at the Parc des Princes. If the team's outspoken stance on social views had been part of their identity before, that was nothing compared to the storm that followed.

The president got involved, obviously. 'Win before you talk,' he said to the defending world champion. Three days of op-eds were written across the spectrum to fill the gaping hole in the three days without a match, as the players rallied behind their leader. She put her side ahead inside five minutes. She sealed the win an hour later. She conducted the stunned silence as she ended the hosts' tournament in their capital city.

England put up a fight in the semi final, with an injured Rapinoe sidelined for the full 90, but the much-maligned Naeher wrote her own redemption story with a save from a late Steph Houghton penalty to seal a third consecutive final berth for her side.

Meanwhile, in the background of another deep tournament run, the team were embroiled in an equal pay dispute with US Soccer – fighting for their rights as a women's football team to be treated on a level with their male counterparts. The team have campaigned time and again, quietly and loudly, for LGBTQ rights and women's rights. No team has represented the overriding social issues of the decade more strongly than the USWNT, and that more than anything is why they are the definitive team of the decade.

However. Caveats. Of the 11 players who started the World Cup final for this team, this representative, inclusive team, only one was non-white. That's not a criticism of the selection decisions made, or of the players who started, but of US Soccer's failure to make the game accessible at the youth level – which has a knock-on effect going forward. That, again, reflects an ongoing inequality in the States (and more broadly) where the first movements of progression overwhelmingly benefit white people. Anyway. The football team.

They came to Lyon and, 26 days after they started their campaign in Reims, won the World Cup. The stadium rang out with chants for equal pay. The USWNT reigned supreme again.