David Silva is ranked 38th in 90min's European Player of the Year series.

The notion of a Manchester City XI without David Silva is almost unimaginable after the diminutive Spaniard's 10 years of service at the Etihad, but we are just five months away from that becoming a sad reality.

El Mago will finally call time on his career with the Cityzens in May having been a key figure in a transformative decade for the blue side of Manchester. Speaking in the summer, he said: " Going into the last day of the Premier League, ​Manchester City almost certainly needed to beat ​Brighton in order to finally see off Liverpool in the hardest-fought title race the top-flight had seen for some time.

After falling behind in the south coast sunshine, City's creator-in-chief came to life. First, the most delicate of flicks played ​Sergio Aguero through to sweep home and restore parity, as awell as the shattered nerves among the travelling faithful in the stands.

Later, with the title back in their hands following an Aymeric Laporte header, a more conventional assist saw Silva lay the ball to Riyad Mahrez on the edge of the Seagulls' penalty area, before the Algerian sold his man with a wonderful dummy and sent a rasping drive into the roof of the net.

The title was heading back to Manchester once again. Victory in at Brighton meant the Guardiola's men had already secured a league and League Cup double, and the Sky Blues had the opportunity to add the FA Cup for an unprecedented domestic treble.

The Manchester club were the overwhelming favourites and the final went pretty much to script (and then slightly off it) as City romped to a 6-0 triumph over ​Watford.

After his heroics as provider against Brighton, Silva notched what was essentially the winning goal at Wembley as he opened the scoring with a bouncing finish into those big old nets. With the departure of fellow club linchpin ​Vincent Kompany at the end of the 2018/19 season, the captaincy was up for grabs.

Guardiola announced that the club's next skipper would be decided by a players' vote, and unsurprisingly David Silva came out on top after nine years in Manchester by that point.

Fernandinho, Kevin De Bruyne and Sergio Aguero are also part of the leadership group, so one of them will presumably take over when Silva departs this summer. 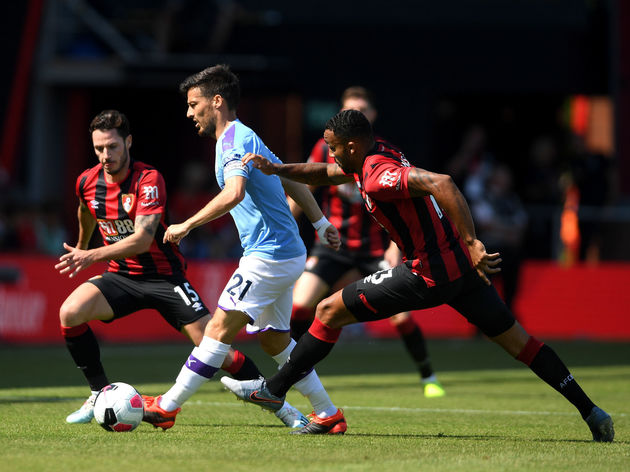 Silva reached an extraordinary landmark earlier this season, and marked the occasion in style. The match at ​Bournemouth on 25 August represented his 400th appearance for the club. That's a lot of games.

Inevitably the 33-year-old was instrumental in a 3-1 victory, turning on the edge of the area and finding Raheem Sterling who made no mistake, before running with the ball and accidentally leaving the it behind - no problem though, Sergio Aguero was on hand to tap home.

Silva continued his creative form in another comfortable victory back on home soil against Brighton the following week, cutting it back for Kevin De Bruyne to finish in the first half before a cute pass around the corner found Aguero, who duly curled the ball beautifully into the top corner.

This is one that went slightly under the radar, but don't worry David - we saw it.

With Pep Guardiola's side desperately trying to close the early season gap to Liverpool as they travelled to ​Newcastle, Silva produced a moment of pure genius. Driving into the box and after a couple of ricochets, the Spaniard produced an outrageous backheel - milliseconds before being clattered - to find ​Raheem Sterling, who swept home. On the face if it it was a scrappy goal as a result of a number of lucky bobbles, but replays showed it was anything but.

David Silva, off balance and about to fall over...

The match will be remembered for two stunning goals courtesy of Kevin De Bruyne and Jonjo Shelvey, but this was a little nugget that the purists will have loved.

David Silva, thank you. You will be missed.