Leicester City fell short of winning their ninth Premier League game in a row after they were frustrated by Norwich City in a 1-1 draw on Saturday.

Despite their inferior league position, the Canaries started much better out of the two teams with Teemu Pukki inches away from latching onto Max Aarons inviting cross 15 minutes in.

The visitors' advantage would last just 12 minutes with Jamie Vardy glancing on a header from James Maddison's corner that Tim Krul then palmed into his own net. After this Leicester re-jigged formation and looked dominant after half time, with Vardy hitting the post in the 47th minute.

The Foxes continued to have the lion's share of possession but struggled to carve out many good opportunities with Norwich defending resolutely. In fact, it was the visitors who came closest to breaking the deadlock, with a last-ditch Ricardo Pereira challenge preventing the Finish striker from grabbing a winner.

After recording eight consecutive Premier League wins prior to this afternoon's game, you would have been forgiven in thinking that the visit of 19th placed Norwich would have been a relatively straightforward task for Brendan Rodgers' side. ​

Surprisingly though Leicester were underwhelming in the opening exchanges and deservedly went behind. Deploying a 4-4-2 diamond that had proved so successful in last weekend's comfortable victory over ​Aston Villa, the hosts were lacking the overloads in wide areas that have brought them so much success during the campaign so far. Attacking full-backs Ben Chilwell and Ricardo Pereira were isolated with Rodgers even substituting Kelechi Iheanacho in the first half to try and provided his side with more width. ​For all the praise that has been lavished on the likes of Jamie Vardy, James Maddison and Harvey Barnes this season, the real thing that makes this Leicester team tick is Wilfred Ndidi.

The Nigerian was imperious once again winning the ball with stunning regularity all afternoon, while also impressing with a range of passing.

Ndidi also showed great leadership to calm down his compatriot Iheanacho, after he was involved in a controversial incident in the first half.

Ndidi has been outstanding for #LCFC today. The only time he has been caught out of position they scored their goal.

Been one of his most vocal critics occasionally, but Wilfred Ndidi is becoming our most important and best player at times#LCFC

Wilfred Ndidi’s first half vs. Norwich City by numbers:

Struggling Norwich would no doubt have been nervous ​going into this afternoon's meeting with the free-scoring Foxes. 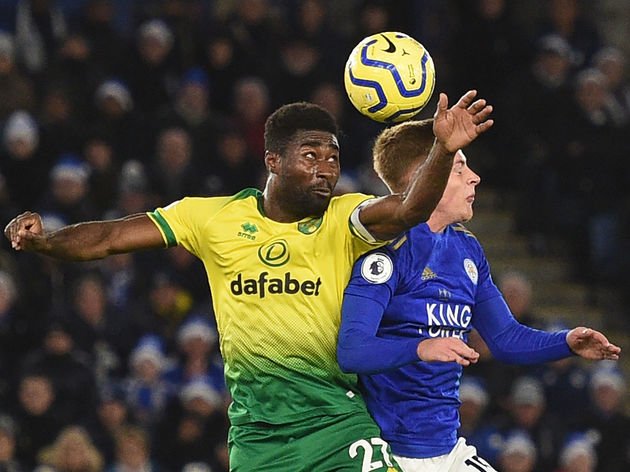 Not many strikers have been able to penetrate the defences of Caglar Soyuncu and Jonny Evans this season and the fact that the Finish international caused the pair so many problems is indicative of his ability.

Pukki took the game's first goal clinically, with his movement always providing the Canaries with an outlet for their counter attacks.

There were warning signs. The striker is so good at peeling into space off the shoulder, and the through ball was perfect. Soyuncu can't match the positioning, and he can't keep up. Pukki slots calmly past Schmeichel. 1-0 Norwich.

The Pukki Party arrives at the King Power. 拾 pic.twitter.com/BrMr8rSUci

Next up, Leicester ​travel to Goodison Park to face Everton in the EFL Cup quarter finals on Wednesday, before they have a festive double header against Manchester City and then Liverpool.

Norwich on the other hand are out of the cup so have to wait a full seven days for their next fixture - a Premier League game against Wolves.