Spain 2010: When Tiki-Taka Prevailed on the Greatest Stage of All

The 2010 was a World Cup of firsts. South Africa became the first country on the continent to host the tournament, while Spain became the first European nation to lift the famous trophy outside of Europe and the first first-time winner since 1998. possession at all times.

It worked in Vienna two years ago. It was going to work again.

Except, it didn't. At first.

Boasting 67% of the ball and having no fewer than 22 shots at goal (ten on target), Spain found no way past the Swiss rearguard, ultimately coming undone to Gelson Fernandes' scrappy breakaway goal. S

Throwback to the 2010 World Cup when Switzerland beat Spain 1-0 in their opening group game.

Spain then went on to win every other game and lift the trophy. pic.twitter.com/OjaS3DUmlD

Amends were made in the following game, as a weak Honduras side were beaten 2-0 courtesy of a Villa brace. Del Bosque changed his approach for this occasion, putting two players up top, as he began to realise the error of his ways.

For all Spain's intricate approach play, the lack of a clinical finisher would severely stunt their hopes of success, and by thrusting Fernando Torres into the side it allowed for more presence in attack, while Villa was willing to drift out wide.

This masterstroke proved to be pivotal for the rest of their group clashes, as they also saw of Chile in their third clash to pip the South American's to top spot on goal difference.

That coughed up a round of 16 clash with Portugal, where the two-man attack continued. Barring a couple of early missed chances, it was a game in which Spain largely remained in control. Keeping the ball with annoyingly efficient frequency, they starved the opposition in the second period, with Villa firing home in the 63rd minute to ensure progression.

#TB to the last World Cup meeting between these two sides:

When Tiki-Taka is mentioned, the Spain sides of Del Bosque and Aragones immediately get credited for the manner with which they capitalised on a plethora of technically gifted midfielders, many of which are some of the finest seen this generation.

Iniesta and Xavi were masters of their craft for countless seasons, never dropping their performance levels and repeatedly demonstrating the magic you can do with simply passing a ball.

​​Sergio Ramos earned his stripes as a right back, providing the width needed for Iniesta to cut inside, while the unheralded Villarreal left back Joan Capdevila flew under the radar despite consistently providing width down the flank with undetected guile.

But it was none of them who have the most decisive say in their quarter-final clash with Paraguay, oh no. It was Iker Casillas who denied 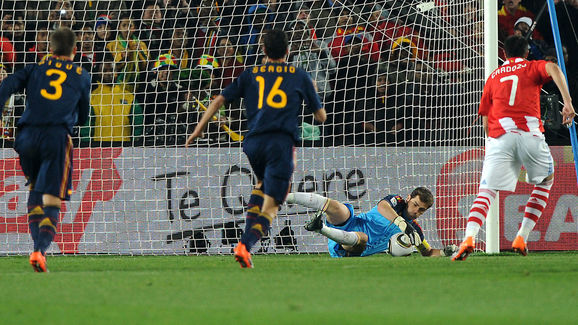 Xabi Alonso would also be denied from the spot - after a re-take - with Villa once again showing his clinical edge to fire in a late winner.

Staring down at the face of defeat, La Roja discovered a new side of themselves that would put them in great stead for the semi-finals: resilience.

Against a side Del Bosque claimed were 'the best in the world' at the time, Spain were controlling and determined, working tirelessly to unpick the defensive lock in front of them and spurning chances in either half to ensure the victory would come more comfortably than it did.

Puyol's thumping header proved the difference, but it was the majesty of the midfield who broke down the Germans' resilience throughout the match. World Cup victory was within their sights. 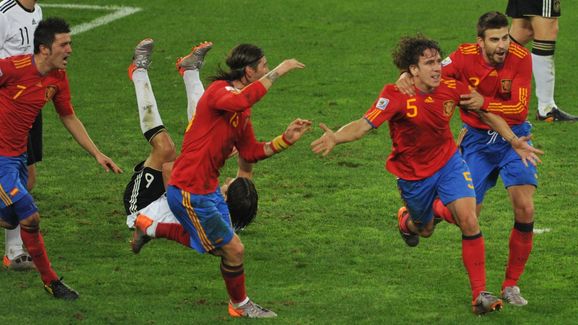 Spain's final opponents were the Netherlands, who had also shone at Euro 2008 before a shock exit to Russia. They enjoyed keeping hold of the ball themselves and had some of the world's preeminent creators in Wesley Sneijder and Arjen Robben, but they were not Spain.

La Roja dominated possession and created a good number of chances on 11 July in Soccer City Johannesburg, but while

Nevertheless, the Iniesta and Xavi partnership was the driving force behind Spain's eventual victory. These were two players born to play football, in a side moulded to win matches by starving the opposition of oxygen.

This style of football had its origins in 2008, but it came of age and put its stamp on the world in South Africa. Fittingly, it was Iniesta's goal which handed Spain their first taste of success on the world's biggest stage. The greatest goal in the nation's history.

His 116th minute goal vs. the Netherlands in 2010 secured Spain's first ever World Cup.

Tiki-Taka reached its peak at the turn of the decade. No Spanish side since has achieved the success of Del Bosque's squad, while the next generation is trying to find its own voice in a new world where slow, precision buildup has been replaced by a preference for a more relentless high press.

Spain's Golden Generation were the world's champions and we may never see another side quite like them.

​Dortmund 2011/2012: The Double Winning BVB Side Who Were the Coolest Football Team in the World