​Gonzalo Higuaín has been a goalscorer wherever he has played - whether that be in Argentina, Spain, Italy or England (to a certain extent).

For both club and country, the Argentinian has consistently performed during his illustrious 15 year career having bagged 300 goals at club level and another 31 for Argentina.

In recent years, he has often been criticised for his weight or his age but that shouldn't take away from how good his career has been.

So ahead of ​Juventus' clash with Bayer Leverkusen, here are a handful of Higuaín's best moments.

A Brace in the Biggest Derby As you probably already know, the derby between River Plate and Boca Juniors is one of the biggest derbies in world football. It's the perfect place to make a name for yourself and Higuaín did just that.

Having scored five goals in the previous season, a 19-year-old ​Higuaín led the line for his boyhood River Plate and bagged himself a brace on 8 October 2006 against his boyhood club's greatest rivals.

It made clubs in Europe take notice of the young Argentinian who was now being described as 'destined for stardom'. He would go on to score another eight goals in that season, bagging ten in 18 games for River Plate. 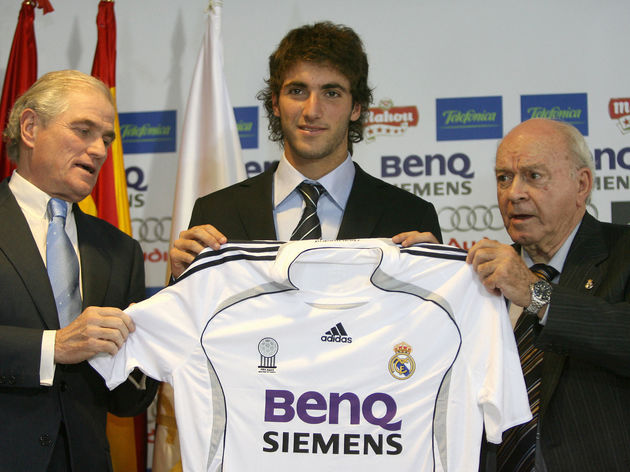 ​Real Madrid were one of the teams taking notice of Higuain. Under Florentino​ Pérez's presidency, Madrid were splashing the cash and were wanting to bring in both current and future stars.

Not only had Higuaín now secured the big move that was tipped for him, but he was playing at arguably the biggest club in the world. While doubts were raised in his first season at the Bernabéu, the Argentinian would become a proven goalscorer in Spain.

Announcing Himself in European Football Higuaín's first two seasons at Real Madrid were lacklustre, to say the least - but when he was given the chance in the 2008/9 season, he took it in a big, big way.

With Ruud van Nistelrooy injured, he was given the starting job and became one of the club's star players. Higuaín would go on to a score a then-career high 24 goals that season, even bagging four one game against Mallorca.

The following season, he would better that total with 29 goals in all competitions, outscoring Cristiano Ronaldo in the league. At international level, too, he scored his first Argentina goal in 2009 and then a World Cup hat-trick against South Korea in 2010.

With 107 goals in 190 league appearances for Real Madrid, Higuaín was proving himself as one of the best strikers in world football. But, at the end of the 2012/13 season having won La Liga three times, he announced he would leave the Bernabéu. Higuaín would sign with ​Napoli in July 2013 for roughly £40m and was given the number nine shirt. His first season in Italy would be one to remember as not only would he continue to score goals, but he would also win trophies.

He finished the season with 24 goals in 46 appearances for the Naples club, scoring a crucial brace in the Coppa Italia semi final - a trophy they would go on to win.

The Argentine was now in his prime and proving himself in another of Europe's top leagues. He would go from strength to strength in the Serie A, reaching the peak of his powers in his final season in Naples.

Breaking the Serie A Goalscoring Record The 2015/16 ​Serie A season is one that Higuaín and Napoli fans will never forget. Having scored 35 goals in his previous two seasons in Italy, Higuaín would score 36 in just 35 appearances in his final season at the club.

Goalscoring wise, No one else came close to the Argentinian in that season but, incredibly, Napoli still did not win the league. This prompted one of the biggest transfers of all time as Higuaín went in search of the biggest prize Italian football could offer. After months of speculation, Higuaín was finally announced as a Juventus player in one of the biggest transfers in European football and, at the time, the biggest in Italian league history.

He became the first new signing to score 20 goals in his debut season since 1957/58 as he bagged a total of 24 in 38 games for I Bianconeri. Not only were their individual honours for the forward, but also team honours.

Juventus went on to win the Serie A, obviously, as Higuaín won the double with ​Juve in back-to-back season, while also helping them to a Champions League final. With 60 goals in all competitions for the Old Lady - despite two loan spells - Higuain has continued to score goals ever since.

Becoming One of Europe's Elite At the start of his​ second season with Juventus, Higuaín was already seen as one of the best forwards in the global game.

However, he confirmed this status with a brace against AC Milan on 28 October 2017 - 11 years after that famous brace in the River Plate-Boca Juniors derby. This brace took him alongside only