The likes of LeBron James, Derek Jeter, Tom Brady and Tiger Woods have won the prestigious accolade in the last 20 years, while other greats like Michael Jordan, Muhammad Ali, Wayne Gretzky and Joe Montana have won during its 66-year history. But Rapinoe’s achievements over the course of 2019, coupled with a rising profile off the field, have seen her finish top of the pile.

Already a superstar within women’s football, Rapinoe was the breakout name to a wider global audience at this year’s World Cup in France.

The 34-year-old, who was also on the World Cup winning roster in 2015 and has an Olympic gold medal from 2012, scored six goals at the 2019 tournament, taking home the Golden Ball as best player and Golden Boot as top scorer in addition to winning the competition as a whole.

She was also named Best FIFA Women’s Player in September and won the 2019 Ballon d’Or.

Off the field, Rapinoe has been leading the equal pay calls for USWNT, with the team consistently more successful than their male counterparts in the USMNT. 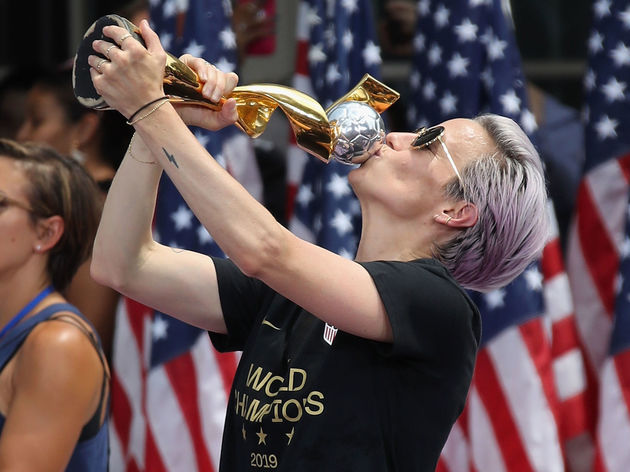 The USWNT won the Sports illustrated award as a collective of the back of their now iconic World Cup triumph on home soil in 1999. But Rapinoe’s win as an individual is a first for soccer.

Aside from Rapinoe and the aforementioned Williams, who won in 2015, Chris Evert and Mary Decker are the only other women to be named Sportsperson of the Year unaccompanied. Billie Jean King, Mary Lou Retton, Judi Brown King, Pattie Sheehan and Bonnie Blair have previously shared the honour with others at one point or another.