Setting the tone with a 3-0 demolition of SpVgg Greuther Fürth, their four-pronged attack of Arjen Robben, Thomas Muller, Franck Ribery and Mario Mandzukic left terror in their wake, with no defence able to cope with the speed and movement they possessed. In the next seven league matches, 23 goals would follow with just two conceded, as the Bavarian powerhouses repeatedly turned on the style to light up the division and surge towards the top of the Bundesliga. Their first defeat of the season, one

In Europe, their ​Champions League group pitted them against Valencia, Lille and BATE Borisov, with the latter of those sides providing one of the competition's greatest surprises as they humbled Heynckes' side 3-1 on home turf. It turned out to be irrelevant, and perhaps the perfect reminder that focus can never drop, as Die Roten topped their group as winners, with goal difference seeing them narrowly edge the Spanish outfit.

League form took a slight dip - only by their own remarkable standards - as the final eight games of the year saw them draw on three occasions but still maintain a supremely healthy lead at the division's summit.

This wasn't a battle on two fronts, though, as the DFB-Pokal was well within their sights as they breezed their way into the quarter-finals having yet to concede a goal.

The customary winter break granted the club time to recharge and reassess, although little assessment was needed. ​Bayern were an unstoppable force, and even Dortmund up next in the cup and Arsenal in Europe were not going to stop them in their tracks - even if the latter inflicted their third and final defeat of the season.

ON THIS DAY: In 2013, Arsenal beat Bayern Munich 2-0 in the Champions League last-16 only to exit on away goals. pic.twitter.com/cTwZr8rmFI

Use any superlative you like. Nothing could stop them.

It was as if they wanted to get the league sewn up as early as possible, thus shifting their focus solely on cup competitions, where they would need all the mental strength they could muster to banish last season's demons.

Unrelenting, a farcical number of 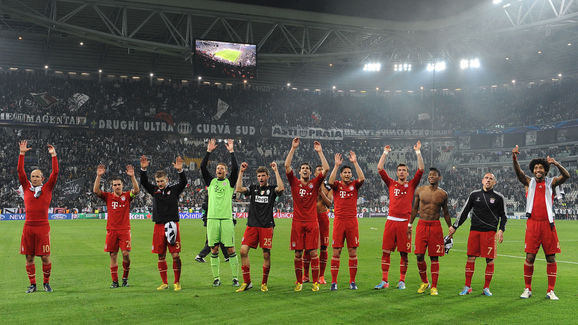 Many will rightly say that the Champions League was won in the final, but to suggest Bayern were going to do anything other than lift the trophy after their showing against Lionel Messi and co would have been a very brave claim.

It was 180 minutes that shook European football. T ​Germany 2014: The World Cup-Winning Squad That Took 14 Years to Build