​Chelsea beat Manchester City in a significant ‘top three’ battle in the latest round of Women’s Super League fixtures, leapfrogging their title rivals in the table and keeping the pressure on reigning champions and leaders Arsenal, who also won.

It was a late quickfire comeback win for Emma Hayes’ Chelsea at Kingsmeadow on Sunday. The visitors from Manchester had taken the lead through Caroline Weir just before the hour mark and were on course to inflict Chelsea’s first defeat of the season so far. 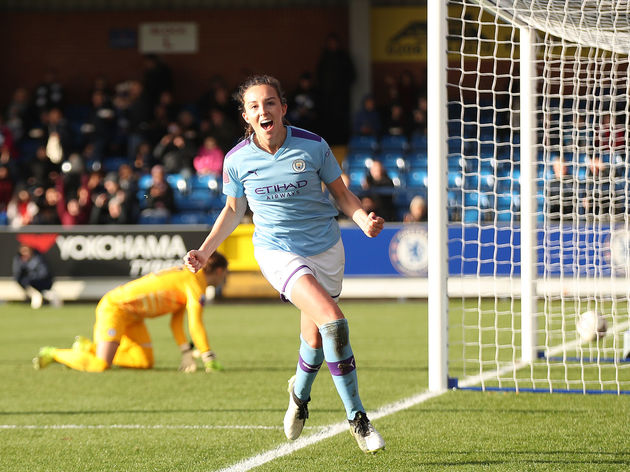 But two goals in the space of just three minutes turned the game on its head. First, Bethany England equalised from a header, before then turning provider for Maren Mjelde to win it.

Arsenal were also winners on Sunday after a comfortable 3-0 victory away at Reading. Two more goals for Dutch forward Vivianne Miedema took her WSL tally for the season to 12 in nine games, with Sunday’s second a majestic lob after a cross-field pass from Danielle van de Donk.

Kim Little also scored for Arsenal, who will be well aware that Chelsea are waiting to pounce.

Chelsea are just two points behind the Gunners and have a game in hand as a result of their clash with Everton earlier this month being postponed because of a frozen pitch.

Elsewhere, Manchester United returned to winning ways following a shock defeat to West Ham in their last outing. The Red Devils went behind early against Everton through a second minute own goal from goalkeeper Mary Earps. But teenage star Lauren James immediately equalised.

United were then ahead soon afterwards when Katie Zelem converted from the penalty spot, while James got her second of the game to make it 3-1, with all four goals scored in the first half.

United leapfrogged Everton into fourth place as result of the win, although the Toffees are only behind on goal difference and also have a game in hand.

Liverpool managed only their second goal of the season to draw 1-1 with West Ham and end a run of four consecutive defeats. The win-less Reds, who remain bottom of the WSL, looked to be heading for another loss after Adriana Leon scored for West Ham early on.

However, summer signing Melissa Lawley created a late equaliser for Niamh Charles to rescue a point for Liverpool. Despite their poor run of results, they are only marginally adrift of safety.

That is because Bristol City continue to struggle. Without a win this season, they fell to a 2-0 home defeat to an improving Birmingham. Lucy Whipp and Abbi Grant scored the goals in either half.

Tottenham managed their first win since October in a close game against Brighton. An own goal from Brighton’s Victoria Williams settled the 1-0 victory in favour of the home side, with Spurs still just about in reach of Manchester United and Everton immediately above them.

How's it looking for your team? pic.twitter.com/BUC3uZzOsZ

Sunday 15 December will be the final WSL matchday of 2019, at which point the league will pause for the winter break and resume in early January.