Manchester City may be defending Premier League champions, having collected a record-smashing 198 points over the last two seasons and spent close to £500m on new talent since 2017 to achieve their unprecedented domestic dominance. However, according to manager Pep Guardiola, they are now at a stage where they cannot compete with Ole Gunnar Solskjaer's ​Manchester United...or the rest of Europe's biggest clubs.

The Spaniard's words come after City's ​shock 2-1 defeat to their famous rivals at the Etihad on Saturday, a defeat that left them 14 points behind Premier League leaders ​Liverpool, and their season in (relative) crisis. City have already dropped 16 points in their opening 16 games - the same amount they dropped over the entirety of last season - and Guardiola reckons it's a sign his side are now not at the level of the likes of United, who sit eight points behind them and haven't won the league since 2013...

“We tried to play, we tried to arrive in the final third, but they have eight or nine players there and their physicality is strong in that position.

“But that’s the level we face against Liverpool, United, Barcelona, Madrid, Juventus. 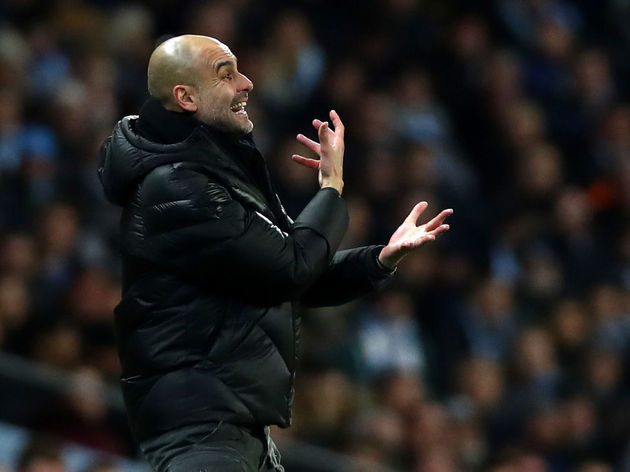 “Those are the teams we have to face and the reality is maybe we’re not now able to compete with them, so we have to improve, accept it and move forward.

“We have to look at ourselves and say ‘okay, what do we need to do to try again and again.”

While not quite conceding defeat in the title race, the 48-year-old did everything but, hinting that the chasm that exists between ​City and the Premier League leaders means that other trophies may now be the priority.

“The reality is we’re 14 points behind for the mistakes we have done, for the quality of our opponents and especially, the things we cannot control," he went on.

“That’s the reality, but we have to continue. We’re at the beginning of December and we have other competitions to play and other games to fight in.

“Maybe it’s going to help us for the future, so we need to live that as a club to be better.”