Newcastle United claimed a vital victory over Southampton on Sunday afternoon, which lifted the spirited Magpies into the top half of the Premier League table.

Southampton had a great chance to break the deadlock when Nathan Redmond intercepted a loose back-pass, but Martin Dubravka kept out the low effort. The big goalkeeper then showed excellent reflexes to palm away Redmond's fierce drive from the resulting corner kick.

Newcastle fell behind five minutes into the second half, Danny Ings latching onto a long ball over the top and cooly slotting home his tenth goal in 11 games in all competitions. The Magpies equalised midway through the second half however, Jonjo Shelvey heading home a dangerous cross from substitute Andy Carroll.

The game appeared to be heading for a draw until Sean Longstaff's drive from distance was spilled by Alex McCarthy, and defender Federico Fernandez lashed the ball into the net to sink Southampton to a crushing last-gasp defeat.

How long is it until we can officially call Joelinton a complete waste of money? The big Brazilian striker sucked the life out of ​Newcastle's attacking play all afternoon, and generally looked a few yards off the pace. The 23-year-old infuriated talisman Allan Saint-Maximin in the first half, after the Frenchman danced through several tackles and stroked the ball through to his striker, only for Joelinton to suddenly change his run and hopelessly mis-control the pass.

The former Hoffenheim man failed to impose himself as a physical presence throughout the match, and he was substituted on the hour-mark by Steve Bruce. Joelinton must adapt quickly to the demands of the English game, or he may find himself replaced permanently by the dominant ​Andy Carroll.

STAR MAN - Has the Premier League ever seen a more unpredictable player? Or one quite as frustrating?

Allan Saint-Maximin is growing in confidence as he begins to settle into life in the Premier League, and it truly is a joy to witness. It's been a bumpy few months at St James' Park, as supporters have come to terms with their new manager, following the dramatic departure of cult hero Rafa Benitez. But finally things are starting to take shape for Bruce, and that's mainly thanks to Saint-Maximin. 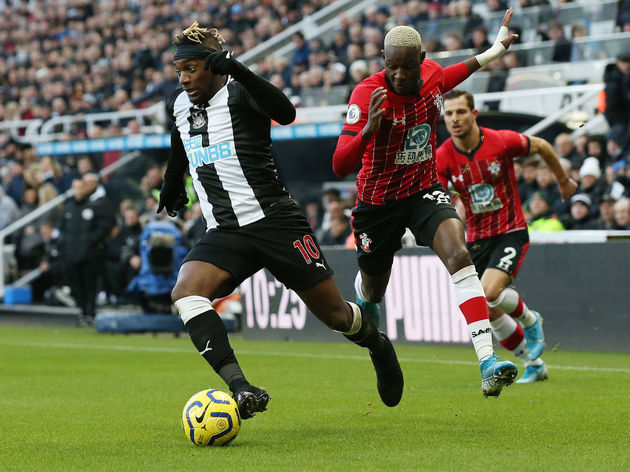 The 22-year-old represents everything that this Newcastle team is not: he is the thunderbolt in the clear Toon sky. It speaks volumes of the player that his every touch lifts his audience off their seats, and his trickery and guile terrifies every full-back that he faces.

Never has an unnecessary step-over and dummy been so exciting.

Week in, week out Saint Maximin does all the attacking work for Newcastle, and then the rest of the team just destroys it

Saint-Maximin picks the ball up on the counter, sends Cedric for an ice cream, goes on a run, and then very nearly threads through Joelinton.

Hasenhuttl immediately turns to his dugout and makes a pressing motion with his hand. That's the gameplan he has to stop today.

When you're deep in a relegation battle, you need two things to drag you out of the mire: an organised, defensive team with a predatory striker to snatch the crucial goals. Well, that's exactly what H​Southampton STAR MAN - Get your fingers and toes out and count how many Premier League teams wold benefit from James Ward-Prowse's presence. You might need all four limbs. Ward-Prowse is an absolute Rolls Royce in the centre of the midfield, but the 25-year-old can also mix it up when required.

The Southampton youth academy product is like a quarter-back in the centre of the pitch, collecting possession and whipping dangerous and pinpoint passes in every direction. Ward-Prowse was at the heart of Saints' play on Sunday afternoon, switching play and dictating the pace of proceedings at every given opportunity. The dynamic midfielder famously delivers a vicious set-piece - a vital weapon for any team battling relegation. He may have been on the losing side on Sunday afternoon, but he will be key to Saints' survival hopes this year.

Berty, however, can’t convert at the back post. Still 1-1 with a quarter hour to play. #saintsfc

Ings carry job for Southampton this season has been immense .. shout out James Ward Prowse too

Newcastle face a tough trip to Turf Moor next Saturday, where the Magpies will take on Sean Dyche's ​Burnley in an interesting mid-table clash.

Southampton will hope to kickstart their mini-revival when they host struggling ​West Ham next weekend, as