Mönchengladbach vs Bayern: 6 Key Facts & Stats to Impress Your Mates Ahead of Bundesliga Clash

Gladbach have made a highly impressive start to the 2019/20 campaign and are leading the way at the top of the table, having picked up 28 points from their opening 13 clashes.

As for Bayern, they are four points adrift of their next opponents after slipping to a 2-1 defeat to Bayer Leverkusen last time out. As a result, they currently occupy fourth spot in the table.

To get you in the mood for the upcoming game, thanks to our kind folk at Opta, we bring you some of the key facts and stats... 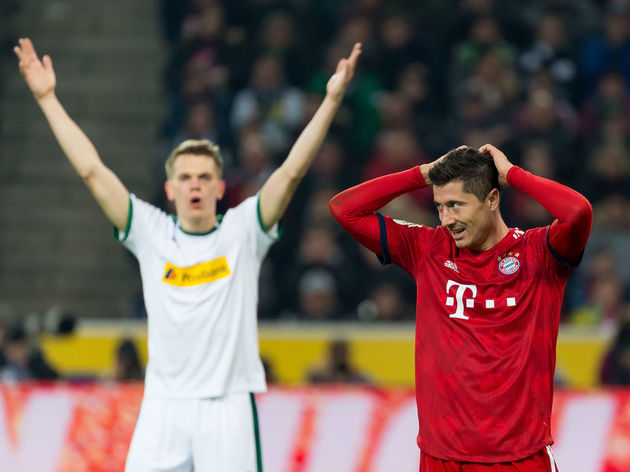 ​Bayern have struggled in recent seasons against their fellow Germans. In fact, they have lost six of their 16 Bundesliga meetings against Gladbach since summer 2011 (W7, D3). This is more defeats than against any other side.

To add to this, Die Roten have suffered more Bundesliga losses at Gladbach than they have away to any other side (20). They only average 1.1 points in Mönchengladbach – their lowest average when visiting any league side (minimum five games).

But...Gladbach Have Their Own Struggles Let's not get ahead of ourselves here though, as Gladbach have suffered more defeats (49) and conceded more goals (195) against Bayern than versus any other side in the ​Bundesliga.

At this point, it might be worth mentioning that Robert Lewandowski will be looking to add to his 1,456 goals this season. What? It's not that many? Something around that figure, anyway.

Free-Scoring But Leaky at the Back The hosts are lethal in attack. They have won their last five Bundesliga home games, scoring 18 goals (an average of 3.6 per game). In all five of these games, Marco Rose's men found the net at least twice.

Although they certainly pose a real threat going forward, they do tend to struggle to keep it tight at the back. The have only managed to keep one clean sheet in their last 15 league games at home. On this run, Rose's men have let in a staggering 29 goals, which is almost two on average.

Bayern to Slip to Back-to-Back Defeats? Interim boss Hansi Flick made a blistering start to life in charge of Die Roten, winning his first four games by an aggregate score of 16 goals to nil. But, as they say, all good things must come to an end.

And so it did as the German giants fell to a home defeat to Leverkusen last time out. The last time Bayern lost two consecutive Bundesliga games came back in September/October 2018. The first was a 2-0 defeat at Hertha Berlin, while the second was...? Yes, you guessed it. Gladbach ran out 3-0 winners.

It couldn't happen again, could it?