​Borussia Dortmund will be looking to make it back-to-back wins in the Bundesliga as Lucien Favre continues to hang by a thread at Signal Iduna Park.

Last week's victory over a rejuvenated Hertha Berlin side was crucial for Favre, with defeat in that one all but spelling the end for the Swiss coach at BVB. But instead, his side showed character and resilience in the second period to hold onto a 2-1 lead after Mats Hummels had been sent off at the end of the first half. That result meant that Favre survived merely another week, and dropped points on Saturday could be the final straw ahead of their must-win Champions League clash with Slavia Praha on Tuesday night.

Fortunately, Fortuna Dusseldorf aren't exactly setting Germany alight at the moment. Through 13 games, Fortuna sit 15th in the table and just four points clear of the automatic drop zone. Coming into this one, Dortmund are fifth in the Bundesliga

Hummels will serve the first game of his suspension on Saturday after seeing red in Berlin last weekend. 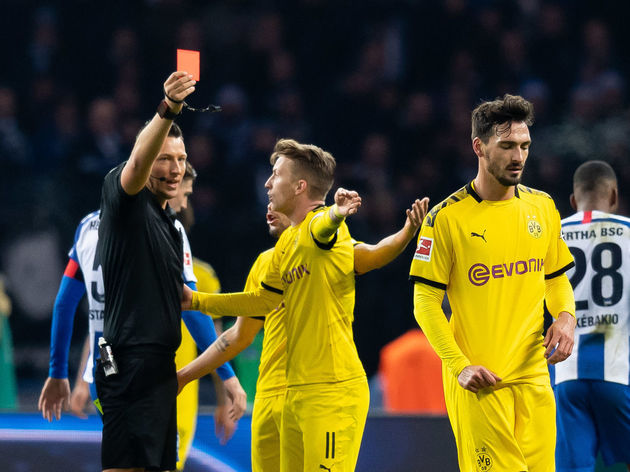 Favre will also be without Thomas Delaney, who will be on the sidelines for the long-haul after tearing ankle ligaments. Left-back Marcel Schmelzer is also out.

The visitors have a rather lengthy injury list coming into Saturday's fixture: Kaan

Dortmund have lost only two of their 15 meetings with Fortuna. One of those defeats came in December 2018; Dusseldorf emerging 2-1 winners that day. BVB are unbeaten in eight home games against Fortuna - six wins and two draws in that time - and have never failed to score against them at home. That means there has never been a goalless draw between the pair at Signal Iduna Park.

Historically, Fortuna have more Bundesliga away wins against BVB (six) than any other club. That said, the last of them came almost 34 years ago.

Before their gritty display in Berlin last weekend, Dortmund had endured a poor run of form that heaped the pressure on Favre.

BVB were brushed aside by Bayern in 'Der Klassiker', losing 4-0 at the Allianz Arena before the November international break. They followed that result up by scraping a 3-3 draw at home to rock-bottom Paderborn after initially being 3-0 down.

Their dismal display - Jadon Sancho aside - in Barcelona the following Wednesday could've been Favre's last game in charge, but he remained at the helm for last weekend's win. It's not all doom and gloom for Dortmund Champions League

That result, however, was just their second point on the road this season and prior to that, they were resoundingly beaten 4-0 by a rampant Bayern

Here's how the two have got on in their last five outings.

History will tell you that there's going to be goals in this one, with no 0-0 draws occurring in this fixture at Signal Iduna Park...ever.
Paco Alcacer coming back into the fold is a huge plus for BVB as it gives them a focal point, rather than having to rely on Marco Reus
Jadon Sancho also built on his fine substitute display at the Camp Nou by scoring the first in the 2-1 win at Hertha. He looks to be playing with real confidence despite the alleged rift with his manager, so expect him to play a role in this one.
BVB should get the win, but with Hummels out, Fortuna should ask some questions of Roman Burki between the Dortmund sticks.
Prediction: Dortmund 3-1 Fortuna Dusseldorf
Related Topics:
Transfer News