Manchester City vs Manchester United: Picking a Combined XI Ahead of Saturday's Derby

​The Manchester derby is always one of the most exciting fixtures of every Premier League season, and Saturday's clash between Manchester City and Manchester United looks set to follow suit.

Pep Guardiola's title hopefuls are desperate to make up some ground on Liverpool, while United still need to pick up points to try salvage a push for the top four.

In anticipation of the game, here's a combined XI of fit and available players from both teams. David de Gea (GK) - When at his best, there are few goalkeepers in the world who can match up to ​De Gea, not even the exceptional Ederson. The Spaniard will likely be busy on Saturday, but he has the quality to rise to the occasion - as he's shown so many times by saving United's bacon.

Kyle Walker (RB) - Aaron Wan-Bissaka deserves consideration here, but ​Walker's role as an integral part of ​City's dominance in recent years cannot be ignored. He continues to fend off competition from

Harry Maguire (CB) - ​Maguire hasn't been at his best in recent weeks, but he still has the potential to turn up and dominate at the Etihad Stadium. His quick thinking and vision could be vital to help ​United break City down.

Fernandinho (CB) - He's not even a centre-back, but ​Fernandinho will likely hold down the spot in the team on Saturday. His defensive awareness is fantastic and he gives City the confidence to throw everyone forward in attack.

Benjamin Mendy (LB) - This is a real shoot-out between City's left-backs, but ​Mendy 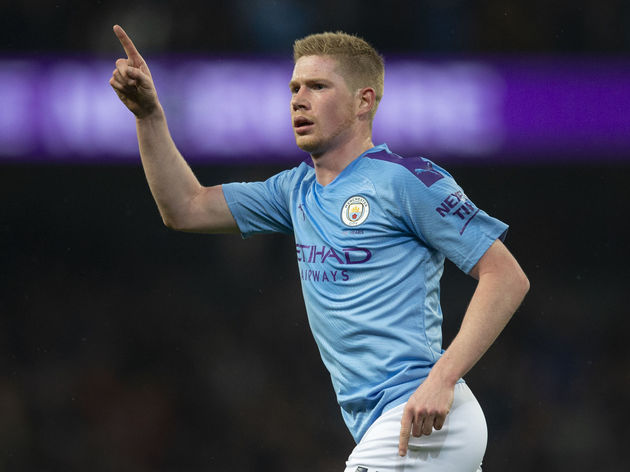 Rodri (DM) - Scott McTominay's form this season could earn him a spot in most combined XI's, but City's Rodri just edges it here. The 23-year-old is fantastic in his role as a midfield anchor, and he comes into this one on the back of netting a screamer in the 4-1 win over ​Burnley.

Kevin De Bruyne (CM) - As one of the best midfielders in world football, ​De Bruyne's inclusion here should not come as much of a shock to anyone. With ten assists to his name already, the Belgian will certainly be a threat at the Etihad.

David Silva (CM) - It's a clean sweep for City. With ​Paul Pogba still out, there's no real competition for City's midfield geniuses, so ​Silva waltzes into the team with ease. With two assists from his last two games, the Spaniard is in good form coming into this one. Bernardo Silva (RW) - ​Silva's creative genius is often one of the most underrated aspects of City's stacked side. The winger is nearly a permanent fixture in Pep Guardiola's team, and deservedly so.

Marcus Rashford (ST) - With ​Sergio Agüero still unavailable through injury, the door is open for ​Rashford to command a place in the team. Consistency has been a real problem for the 22-year-old, but he certainly has the quality to terrorise City if he is on his game.

Raheem Sterling (LW) - Do I even need to explain why ​Sterling gets in here? He's really, really good at football, and you only have to look at his tally of 15 goals and five assists to know that he means business.