As the dust of the sacking of Marco Silva hangs thick in the air, another new era dawns on Goodison Park, and Everton fans are left wondering who on earth will be in charge for the remainder of the season and beyond.

For now, ​it's club legend Duncan Ferguson, while former boss David Moyes ​remains the firm early favourite to come riding in on horseback and turn their season around.

He's not the only manager linked with taking the job on a permanent basis though. Oh no, far from it. 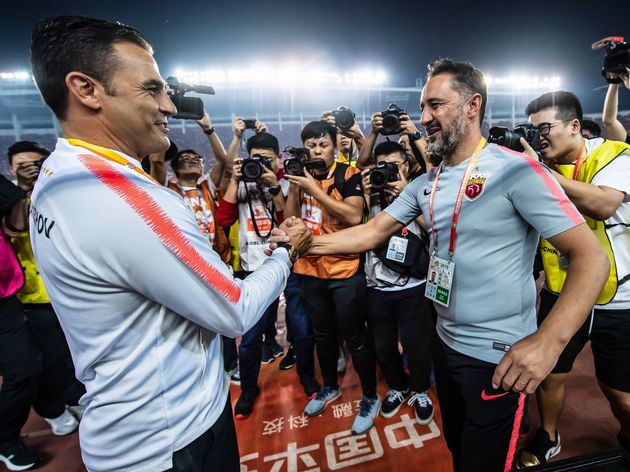 This is the world of football speculation we're talking about, of course, and as such, 14 hours on, we have two shiny new names to ponder over - one being a good deal more realistic than the other.

Coming in from left-field, as per the ​Daily Mail, is Shanghai SIPG coach Vitor Pereira, who was linked to succeed Moyes back in 2013, before the job was handed to Roberto Martinez.

The Portuguese boss, who left Porto after successive league titles that summer, has since gone on to rack up the air miles, managing Al-Ahli, Olympiacos, Fenerbahce and 1860 Munich, before landing in China in 2017, where he has since led the East Asian side to a Super League and a Chinese Cup.

He has developed a reputation for being a bit, err, spiky (as evidenced by that clip from one of his press conferences), but he remains a highly-respected coach. Having just concluded the CSL season with a third-placed finish earlier this month, the timing does seem right for a move to Europe, and as such he's apparently one of the leading candidates.

It might seem like a bit of an outlandish appointment, but that has nothing on the links that have emerged, despite all logic and reason saying 'no', with Napoli manager Carlo Ancelotti.

He's also 'on the shortlist' according to the Mail's Dominic King, who notes that the three-time Champions League winner is also in Arsenal's thinking.

Vitor Perreira joined by Carlo Ancelotti on Everton’s managerial shortlist. David Moyes also an option but the fact he has not been appointed yet while freely available shows some within club have doubts. Ancelotti also in Arsenal’s thinking.

Stranger things have happened, granted, but the idea of one of the ​most decorated coaches in recent football history swapping southern Italy, Champions League football, and actually competing with Liverpool over 90 minutes, for a Premier League relegation battle, seems more than a little ambitious.

But hey, it's been a tough season for ​Everton. Enjoy it.

Who Is Nico Melamed? Everything You Need to Know About the Talented Espanyol TeenBarcelona Growing More Confident of Securing Inter Striker Lautaro MartínezTottenham Tipped to Rival Manchester United in Race to Sign Veteran Diego Godin