Mason Mount's bolt from the blue ensured Chelsea bounced back from their defeat to West Ham with a 2-1 home win against a spirited Aston Villa on Wednesday.

Chelsea started brightly, and Tammy Abraham marked his return to the side with the opener.

The ball was worked to Reece James, whose delicate cross was met by an unopposed Abraham to head home.

The home side were dominant, but then moments before the break, Villa countered and equalised.

Ahmad Elmohamaday whipped in a wicked delivery, which Trezeguet met with a combination of head and foot to bundle the ball home. Willian almost made the points safe with ten minutes to go but his free-kick was expertly tipped onto the post by the Villa goalkeeper.

Lampard was able to call on Abraham, who was the focal point of every Chelsea attack. He was involved in everything going forward.

And then there was Mount, who while anonymous in the first half began dictating play in the second, and fired Chelsea into the lead with an unstoppable strike.

Lampard's side may concede too many, but their youthful exuberance makes them one of the most exciting teams in the league.

The answer was yes, and Villa couldn't live with him. Abraham got Chelsea’s opener and was a real handful all night.

He gave Ezri Konsa a torrid time at centre-half, after slipping him for the first goal, and he then outmuscled him for Mount’s spectacular strike.

The 22-year-old came within whiskers of a second on a couple of occasions too.

After leaving Old Trafford with a draw, the question was whether ​Villa could claim more points away to one of the league's big hitters.

However, having got themselves back in the game with the equaliser on the stroke of half-time, Dean Smith will be disappointed by his team conceding so soon after the break. 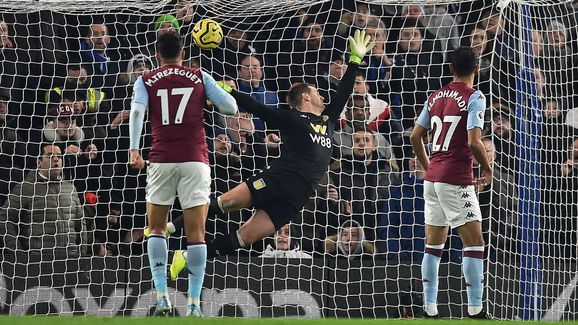 Villa were far from the performance they gave against Manchester United and the goal was a real sucker-punch for the visitors.

They fought valiantly to keep the score down but they never looked like getting back on level terms once Mount had put Chelsea back in front.

No more sO than for the goal, when his sumptuous cross from the right provided the assist for Trezeguet’s equaliser.

why has elmohamady been our best attacker so far?

The delivery had such verve and whip on it, that the Chelsea defence were unable to deal with it and although the finish was fortunate, the ball was deserving of a goal.

And, then late in the second half, the Egyptian had a chance to snatch a point but he was unable to keep his shot down.

Chelsea travel to Goodison Park in the lunchtime kick-off in the ​Premier League on Saturday to take on Marco Silva's struggling ​Everton side.

Dean Smith's men have a Midlands derby on their hands as they welcome high flying ​Leicester City to Villa Park in the league on Sunday.