Wolverhampton Wanderers moved back up to 5th in the Premier League table with a 2-0 victory over out of form West Ham United​ at Molineux on Wednesday night.

Nuno Espirito Santo's side were the better team in the first half, and deservedly took the lead when Leander Dendoncker outmuscled Ryan Fredericks to prod home a Joao Moutinho corner.

West Ham did respond well, and went close through Declan Rice and Pablo Fornals, but ultimately looked a shadow of the side that beat Chelsea at the weekend. Raul Jimenez and Jonny wasted good chances when through one on one with David Martin, before Patrick Cutrone then made the game safe five minutes from time, after the Hammers gave the ball away again midfield.

It is incredible to say that Wolves have not lost a single point from winning positions this season, and the question now has to be how far can they go?

Nuno Espirito Santo's side don't seem to be suffering from any Europa League hangover like many teams before them, and are flying high in fifth after their longest top flight unbeaten run since 1972. The only thing that could scupper their season ahead of a busy festive period is their thin squad. Nuno has used just 19 players this campaign - the lowest in the Premier League - but if they can avoid injuries, there's no reason why they can't still be in the top six come May. 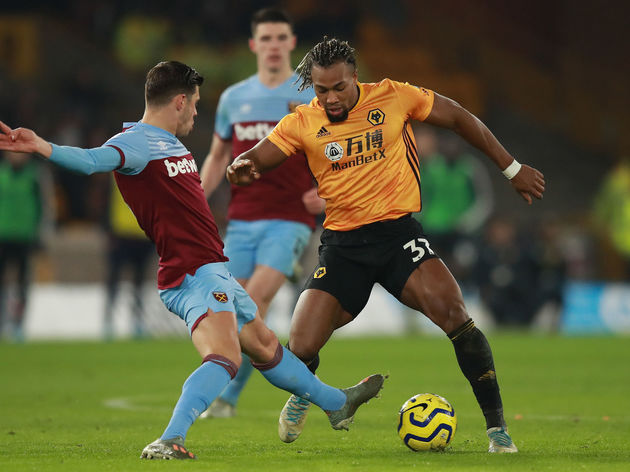 The criticism of Adama Traore has always been that he does not have the end product to match his terrifying build up play, but this season that has changed.

The Spaniard's direct running was a threat for West Ham all night and he could easily have had an assist if Jimenez had brought his shooting boots.

Traore was also diligent in his defensive work as well, and was fully deserving of the standing ovation he received when he was subbed late on. A win on Saturday against Chelsea would have been enough to keep the wolves from the door for a while for Manuel Pellegrini, but this lacklustre display may well have eroded much have the good will built up by their derby win.

The Chilean was forced to recall club record signing Sebastian Haller after Michail Antonio's  injury, and the centre forward offered very little in terms of hold up play as the Hammers looked to sit deep and hit Wolves on the counter.

Despite looking better in defence and in goal with David Martin continuing in place of Roberto, The Hammers looked blunt going forward and lacked creativity in the final third.

They're currently five points off a Europa League spot, and if the poor performances continue, Pellegrini - who faced chants of sacked in the morning from home fans late on - could easily be the next Premier League manager to face the axe.

David Martin's fairytale continued again as he put in another fine display in the West Ham goal following his clean sheet against Chelsea.

There was little he could do for either goal, and had he not been so quick coming off his line for Raul Jimenez and Jonny's chances then the result could have been even worse for the Hammers.

With Lukasz Fabianski not set to return until the new year, and Roberto proving to be arguably one of the worst goalkeepers in Premier League history, Hammers fans will at least be confident in having Martin between the sticks over the Christmas period. Wolves will be looking to extend their unbeaten run when they host Brighton before a dead rubber against Besiktas in the Europa League.

West Ham on the other hand will be looking to reignite their faltering push for European football​ when they host Arsenal at the London Stadium next Monday.