​In this huge clash of Italian giants, Serie A leaders Inter face a tough challenge as they host fifth place Roma at San Siro on Friday night.

Inter are sat top of the table having won 12 of their 14 league games this season. They've won five on the bounce and are unbeaten in seven league games, and they displaced Juventus with a Lautaro Martinez-inspired 2-1 win over SPAL last week.

Roma, on the other hand, sit just outside the Champions League qualification spots in fifth having won back-to-back ​Serie A games. They recorded an important 3-1 win away in Verona last time out as they look to keep in touch with the top four.

This is an absolutely massive game in the Serie A season as the Antonio Conte-led Inter could make a huge statement and go four points clear before the chasing pack play. Roma will be wanting one of those European spots and losing at the San Siro could stall their attempts.

​Inter boss Antonio Conte will have to contend with three injuries to central midfielders in preparation for this game. Both Nicolo Barella and Stefano Sensi are out until 2020, while Roberto Gagliardini is a week away from fitness after suffering a foot injury against SPAL.

The other main injury news is that Manchester United loanee ​Alexis Sanchez is out with a long-term tendon injury and won't return until the new year for Inter. There may be a recall for Cristiano Biraghi down the left side of midfield. Roma will be without both Bryan Cristante and Davide Zappacosta who are out until 2020 with long term injuries. Javier Pastore is also unavailable with a hip injury.

Out wide, there will likely be a recall for ​Henrikh Mkhitaryan who came on for the injured Justin Kluivert in the win against Verona. The Armenian scored in stoppage time to secure the win for Roma.

The head-to-head record between these two Italian giants is unsurprisingly pretty close. Inter have won 25 games to Roma's 20, while there have also been 24 draws between the two.

The recent fixtures, too, have repeated this trend with the teams drawing five of the last 12. In that time Inter have won three and Roma have won four. The last game between the two sides was at San Siro which ended in a 1-1 draw in April of this year. Both the goal scorers in that ​game, ​Ivan Perišić and Stephan El Shaarawy, and the managers, Claudio Ranieri and Luciano Spalletti, have since moved onto new pastures.

Inter have been terrific recently and have won their last five Serie A games in a row, sending them to the top of the league ahead of Juventus.

They've only lost once all season - to Juve - and have won a league high 12 games. The last time they didn't win a Serie A game was at the end of October, when they drew 2-2 at home to Parma. In the mean time, Roma have also been in good form having won four of their last five. They recorded back-to-back league wins last week over Verona and bottom side Brescia.

They've only lost twice all season losing away at Parma and at home to Atalanta. Roma have achieved huge wins over some of Italy's biggest teams beating both Napoli and AC Milan in recent weeks.

This is simply one of the biggest games in European football this weekend and could have huge implications on who becomes Italians champions. 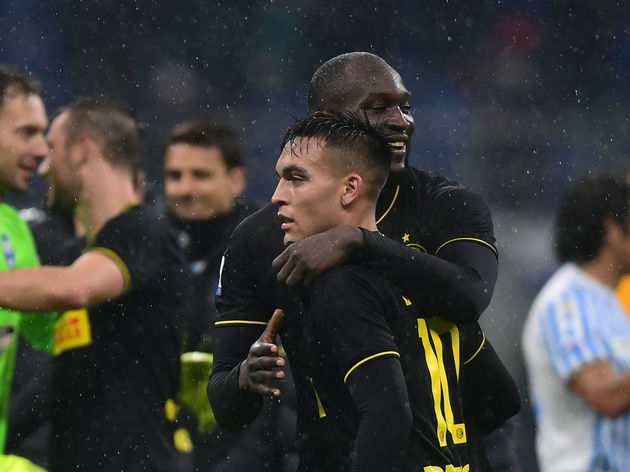 Both teams are in fantastic form and are playing some attractive football - especially Inter with their front two of ​Romelu Lukaku and Lautaro Martinez. It will be interesting to see what happens when Lukaku goes head-to-head with former Manchester United teammate Chris Smalling.

However, Roma will provide a stern test and have the know-how to beat the big teams this season. Having said that, Inter will sneak this one to continue their winning run and will be inspired by their front two, once again.