This was a league which contained two of the ten best players in history, at the peaks of their respective powers, playing for two genuine superpowers. Barcelona had Messi, Neymar, Xavi, Iniesta, Alves and Busquets. Real Madrid had Ronaldo, Pepe, Ramos, Bale, Alonso, Modric, Benzema and Isco. The idea of one of those two sides not winning the league was absurd at the time and it's absurd now.

But Atletico Madrid won La Liga in 2013/14. And they came within a hair of winning the Champions League. How? Diego Simeone is how. El Cholo arrived at the Vicente Calderon in 2011 to a club in a lull. Sergio Aguero and Diego Forlan had departed for Manchester City and Inter respectively, while promising young goalkeeper David de Gea had followed Aguero to England's north-west.

Gregorio Manzano was sacked after overseeing defeat to Segunda B side Albacete in the Copa del Rey, and Simeone was airdropped in two days before Christmas. The best part of eight years later, he's still there. The players have changed, the stadium has changed, but Cholo remains.

His era began with a UEFA Cup win in the summer of 2012, and his first full season saw Atleti record their highest league finish since their title-winning season of 1996 – plus victory in the Copa del Rey, beating Real at the Bernabeu in the final to claim their first domestic silverware in 17 years. It was all building up to the 2013/14 season, the peak of the Simeone era's powers.

Radamel Falcao scored 70 goals over those two seasons, which is probably why Monaco came in and paid €60m for him in the summer of 2013, robbing Atleti of their game-breaking goal threat. He ended up destroying his ACL in January, and didn't return to anything like his best for two and a half years.

To replace him, Atleti brought in an ageing David Villa for one last hurrah, a single season before he jetted off into his pre-retirement world tour. Partnering Spain's greatest ever striker up front was one It's important, here, to take a moment and remember the outsize being that is Diego Costa. A furious animal barely contained within human skin, he scored goals by bullying. Bullying the defenders, bullying the ball, bullying himself into becoming a good enough striker to lead the line in a Champions League final. Costa, on the pitch, is a nasty guy. He's a nightmare to deal with.

At 20:45 in Lisbon, he was the nightmare. At 20:55, the nightmare was his own. He limped off the pitch. He didn't play for Atleti again for three and a half years.

Without their talismanic striker, Simeone's men lacked a focal point – but Godin, the rock at the back, the non-scoring Uruguayan defender, scored his second crucial goal in just over a week to put Atleti ahead at the break.

The minutes of the second half ticked on. Real huffed and puffed against their little Madrid brothers, wearing them down to the bone, but just couldn't score.

And then, in the 93rd minute, Sergio Ramos thumped a header beyond Courtois to take the game to extra time. Atleti were shattered; losing 4-1 after extra time as the game fell away from them. 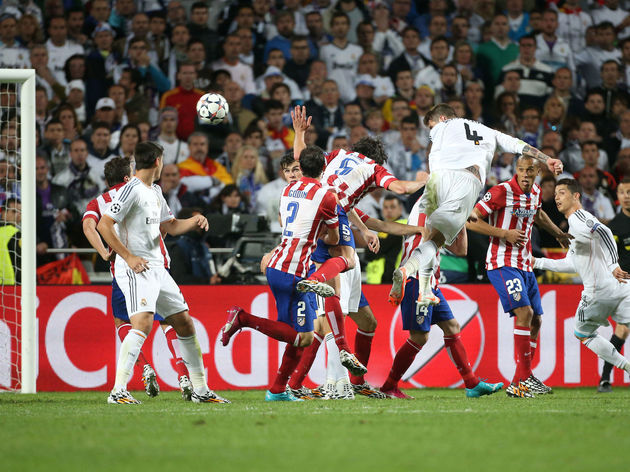