​Both Arsenal and Everton are understood to be considering moves for former Valencia boss Marcelino in their search for new managers.

The Gunners are still looking for a permanent replacement to Unai Emery, who was sacked last week, while Toffees boss Marco Silva is thought to be perilously close to the exit door at Goodison Park after weeks of underwhelming performances. According to the ​Daily Mail, the two sides have both taken a keen interest in Marcelino, who has been out of work since being sacked by Valencia back in September following a clash with the club owner, Peter Lim.

​Arsenal head of football Raul Sanllehi is understood to be a huge fan of Marcelino's work in Spain, and it is claimed that the former Valencia man was even under consideration before appointing Emery back in 2018.

He is credited for helping Valencia return to the ​Champions League and toppling ​Barcelona in the Copa del Rey final last season, and Arsenal were impressed with the way he could awaken a sleeping giant - something which they feel they need at the Emirates Stadium.

Sanllehi and sporting director Edu have already begun the search for a new head coach. The first team has been left in the hands of interim boss Freddie Ljungberg, but there have been plenty of names linked with a move to the Emirates.

​Manchester City assistant manager Mikel Arteta and ​Leicester City's Brendan Rodgers are two of the club's top candidates, but Arsenal are aware that it would likely be easier to recruit somebody like that at the end of the season, so as not to disrupt the other club's season.

That has led them to searching the free agent market. Marcelino is one of the more high-profile names who is currently available, and the fact that he could be brought in quickly and at very little cost is said to work in his favour. 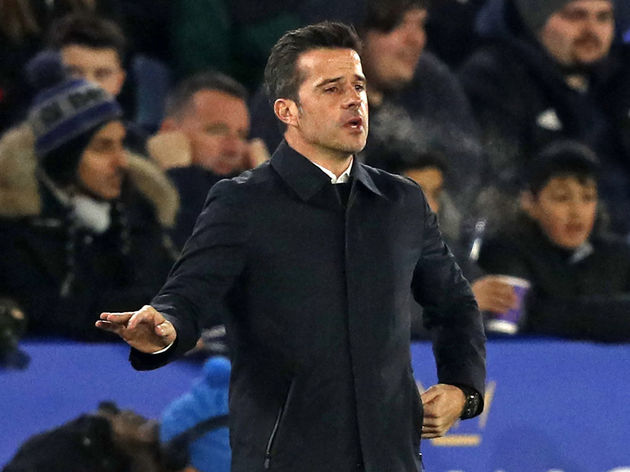 However, with ​Everton also in the mix, Arsenal may need to act soon if they are seriously interested in bringing Marcelino to the ​Premier League.

The Toffees have reportedly asked Marcelino about his interest in heading to England, although they are yet to actually have any concrete negotiations as they still have Silva in the dugout.