​Last week, we reminded you that Jose Mourinho is 'back, baby'.

This week, we're here to tell you that not only Mourinho is back, baby, but Dele Alli is most certainly back too. Baby.

Yes, the Special One™ has sparked north London back to life, reinvigorating in the process one of the most talented English players of a generation. Things may be rosey there but over on the red side of north London, things are a whole lot messier. Unai Emery is out, Freddie Ljungberg is in - but it's same old Arsenal after a frustrating draw at Todd Cantwell-inspired Norwich.

Speaking of Cantwell, he makes it into this 90min's team of the week for matchday 14, but who else does? Well, sit back, relax with a choccy hobnob, a cup of tea and tuck into this bad boy... Bernd Leno (GK) - But Arsenal conceded two goals at Norwich, you can't possibly have their goalkeeper in team of the week? Oh, but we can - because without Leno, things would have been a whole lot worse for the Gunners on Freddie L's first day on the job.

Trent Alexander-Arnold (RB) - When ​TAA was reading the full-back manual growing up, he obviously didn't read the part that said 'occasional' assists will be provided. We say that because against Brighton, he added another two to take his tally to 18 in just 69 Premier League appearances, which is frankly bonkers. The script has been well and truly ripped up at Anfield!

Toby Alderweireld (CB) - Speaking of assists, remember when ​Toby Alderweireld used to ping laser-like diagonal passes over the top for Dele Alli and Harry Kane basically every week? If you don't, we have good news - he's back at it! Two pings against Bournemouth, the first via Son Heung-min, perfectly picked out Dele, who with his new found confidence did the rest. Lovely.

Virgil van Dijk (CB) - The benefactor of the aforementioned Alexander-Arnold's inch perfect deliveries this week? Ballon d'Or runner-up (probably) Virgil van Dijk, who always seems to crop up with a Premier League double somewhere in the season. Brighton were the team to feel his wrath, though the Dutchman will be frustrated that yet another clean sheet slipped through the Reds' fingers.

Aaron Cresswell (LB) - Absolutely nobody thought West Ham would beat Chelsea at Stamford Bridge, apart from me, obviously. But that's exactly what they did, thanks to a pearling finish from Aaron Cresswell on his weak foot. He then turned his hand to shutting the Blues out for the remainder of the game, something that he did with aplomb - leading to tears galore for debutant David Martin, who kept a clean sheet on his Premier League bow. Jonjo Shelvey (CM) - This season, and article for that matter, seems to be revolving around scripts being ripped up, but that's exactly what we saw again on Tyneside this past weekend. Jonjo Shelvey was the man to provide the party piece on this occasion, wonderfully curling home from the edge of the penalty area to put a big ol' dent in Manchester City's title aspirations.

Todd Cantwell (RCM) - Next up on the conveyor belt of script avoiders is Norwich, and young midfielder Todd Cantwell. This week, granted, the Canaries perhaps fancied their chances of getting something out of Arsenal, given how dismal they've been this season, particularly on the road. What Norwich and Cantwell haven't realised is that you're not meant to play free-flowing football with a swagger when you're in danger of relegation.....who needs scripts, eh?

Jack Grealish (LCM) - The longer Jack Grealish continues to put in performances like the one we saw against Manchester United this past weekend, the harder it's going to be for Gareth Southgate to overlook him for England selection. He's, honestly, been wonderful this season, and his gem of a goal at Old Trafford was another fine string to add to his already impressive bow.

Dele Alli (AM) - Out of the side, out of confidence and omitted from England's plans. That was the sorry state affairs surrounding ​Dele during his final days under the management of Mauricio Pochettino. Now, with a special arm around him, and a few tactical tweaks here or there, the 23-year-old looks to be back to his best - long live, Jose! 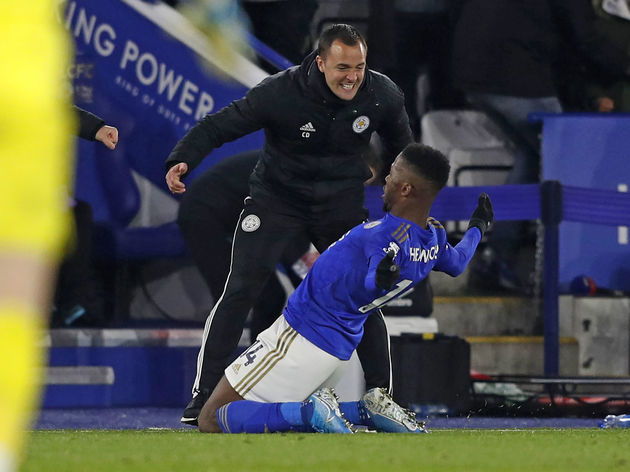 Kelechi Iheanacho (ST) - Having struggled for an hour to break down lowly Everton at King Power, Brendan Rodgers knew he had to change things for Leicester if they were going to put pressure on Liverpool at the top of the table. What he probably didn't know was Iheanacho's introduction, as well as of a change of shape, would result in the Nigerian not only assisting Jamie Vardy's equaliser, but the winning goal in the dying moments of the match. Nice one, Kelechi - and nice one, VAR, who overturned the incorrect offside flag that almost burst his bubble.

Pierre-Emerick Aubamenyang (ST) - Arsenal are currently eighth in the Premier League table, but you really must wonder where they would be without their captain. He's scored 10 of their 20 goals this season and grabbed himself another brace against Norwich, getting away with a missed penalty when Max Aarons was found guilty of encroachment following Tim Krul's save. ​Aubameyang stuck away the second attempt, before rifling home in the second half to spare further blushes at the Emirates.