On 14 May 2011, he completed that impossible task when an otherwise unremarkable 1-1 draw against Blackburn Rovers secured United’s record breaking 19th league title. When Ferguson arrived from Scotland in the dark days of the 1980s, United were in the midst of a two-decade long period of wilderness. The club had enjoyed FA Cup successes on a number of occasions and had finished second, third and fourth in the top flight a number of times, but 1966/67 remained the last time that United had actually been crowned champions.

That domination put the Merseysiders on a record 18 league titles, compared to United’s seven.

United’s success in the inaugural Premier League season in 1992/93 was a watershed moment for Ferguson. He had been overseeing vital changes in the preceding years, but poor results left him in danger of losing his job – FA Cup success in 1990 and a European trophy a year later saved him. That long awaited league trophy, lifted jointly by Steve Bruce and Bryan Robson, was the first step on the long road to catching Liverpool.

That first great Ferguson side containing the likes of Mark Hughes, Paul Ince, Gary Pallister and Eric Cantona was soon replaced by another built on a core of home-grown talent. The mid-2000s later gave way to Ferguson’s third great team, with United dominating English football in a way that even Liverpool had never quite managed – the club won 11 titles in the space of just 17 seasons.

By the end of the 2008/09 campaign, United, having won three in a row for the second time – even Liverpool only managed that tremendous feat once – were at last level with their fierce north west rivals on 18 league titles.

The 19th would be the big one. But it was never a guarantee.

The landscape of English football changed irreversibly during the 2000s. Chelsea and then Manchester City both became additional forces as a result of wealthy owners, while United’s controversial takeover by the Glazer family, combined with the rapid inflation of the transfer market, ensured that United increasingly had to rely on the genius of Ferguson to stay ahead. By 2009, United had lost both Cristiano Ronaldo and Carlos Tevez from the side that won the Champions League in 2007/08. The club was also rocked two months into the 2010/11 campaign when Wayne Rooney made clear he wanted to leave over a perceived lack of ambition.

Insisting the issue wasn’t about money, Rooney, who had enjoyed the best individual season of his career in 2009/10 and was PFA Player of the Year, was seemingly put out by the departures of two key players and the club’s apparent unwillingness to replace them.

He may have had a point. In the summer of 2009, Wigan winger Antonio Valencia and free agent Michael Owen were the most high profile arrivals. A year later, United moved for untested potential in players like Chris Smalling and Javier Hernandez, rather than going big to replenish the side.

The defensive structure that had been the backbone of success in the previous few years remained, although Rio Ferdinand’s fitness struggles ensured the impenetrable Nemanja Vidic, who was named new club captain when Gary Neville retired, often had a rotating partner. 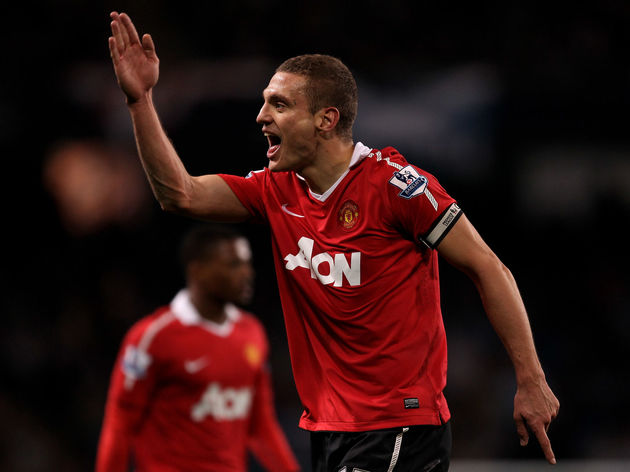 United were proving impossible to beat at the start of the campaign. But, equally, they were struggling to win. When Rooney made his statement, the team had won only three of their opening eight Premier League fixtures and were already trailing reigning champions Chelsea.

Rooney was struggling with an ankle injury at the time, but the news that he had suddenly been persuaded to stay and sign a new long-term contract appeared to lift the squad. After the deal was announced, United won 12 of their next 16 Premier League games and remained unbeaten until early February, by which time, they had been top since late November.

United never relinquished top spot after that, with a 7-1 annihilation of Blackburn at Old Trafford the result which sent Ferguson’s team into first place that day. The game is particularly remembered for a five-goal haul from Dimitar Berbatov, who went on to get 20 in the league and take a share in the Golden Boot along with former teammate Tevez.

One of the defining moments of the season saw Rooney score an iconic overhead kick in the Manchester derby at Old Trafford, just days after United had lost for the first time that season. It served to underline his commitment to the club, as well as United’s continued local dominance. Despite United lacking quality marquees names, the squad was still in a healthy shape. Patrice Evra remained a reliable constant, while Ryan Giggs and Paul Scholes continued to make invaluable contributions, despite their advancing years. The arrival of Hernandez proved to be a masterstoke, with the raw Mexican scoring a number of important goals.

Elsewhere, Nani had his best season in a United shirt, while Ferguson had a plethora of loyal and proven players he knew he could trust to perform when called upon – how the United squad of today would welcome players like Darren Fletcher, John O’Shea or Park Ji-sung.

Chelsea endured a disastrous winter in 2010/11, while the nouveau riche Manchester City were still finding their feet after winning the lottery two years earlier. That, combined with United’s dogged winning mentality under the guidance of the greatest manager of all time, was ultimately what sent the Premier League title back to Old Trafford.

A week after beating Chelsea at Old Trafford – Hernandez and Vidic scored the decisive goals in the first 23 minutes – United needed just a point to secure a record breaking 19th league title against Blackburn. A second half penalty from Rooney ensured they got it. This was the moment Ferguson had been waiting for since the day he arrived. The fact that he had completed his mission, with a less than vintage side by this stage, was down his own brilliance. United also reached the Champions League final that season and it could have been an even bigger achievement but for meeting a Barcelona side many regard as one of the greatest teams ever.